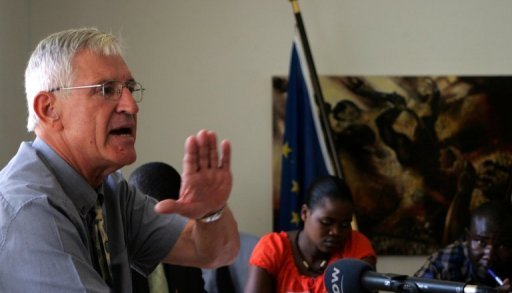 HARARE — Germany warned Wednesday that takeovers of foreign-owned safari ranches by Zimbabwean politicians could jeopardise the country’s co-hosting this year of a UN tourism conference.

“If elements wishing to destroy wildlife and tourism infrastructure in Zimbabwe, protected by the bilateral investment promotion and protection agreement (…) should succeed, this will have a serious effect on Zimbabwe’s qualification to host an international meeting on tourism,” warned Gnodtke.

Algeria president hospitalised in Germany but…

Zimbabwe and its northern neighbour Zambia are due to co-host the United Nations World Tourism Organisation (UNWTO) general assembly in August at the prime Victoria Falls resort on the border between the two nations.

The ambassador blamed what he termed “forced partnerships” between the government and foreign operators for a breakdown in tourism in the 340,000-hectare conservancy, home to lions, buffalos, leopards and rhinos.

“So far tourism is breaking down because marketing of tourism visits cannot go on in view of the outstanding hunting licences,” Gnodtke said.

“We hope and pray that common sense and responsibility prevail and that the Victoria Falls meeting will be a success.”

Ranchers under the aegis of the Save Valley Conservancy include foreign investors from South Africa, Germany, Italy and the United States who are protected by investment agreements between Harare and their respective countries.

According to Gnodtke, two German investors have filed for compensation at the World Bank’s International Centre for Settlement of Investment Disputes.

He said that co-operation between Zimbabwe and Germany — which was frozen in 2002 when the EU imposed sanctions on Mugabe and his allies — would only be restored “once the rule of law and democracy have been re-established in this country.” AFP

Why indigenization will not revive Zimbabwe

Mugabe rushes back to Zimbabwe