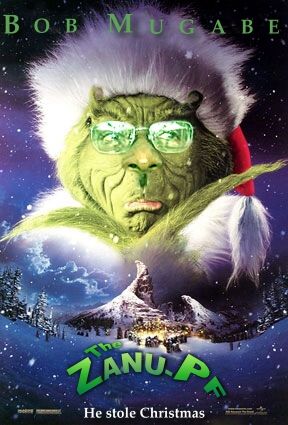 HARARE – Retailers hoping for a last-minute festive season buying frenzy after weeks of flat sales failed to get the tills ringing after a presidential decree declaring Monday a public holiday.

Banks closed for business on Friday and will re-open on December 27 after President Robert Mugabe’s proclamation that Monday is a public holiday. The arbitrary Monday declaration has dampened spirits somewhat, with many in a last-minute rush to access cash.

Weary Zimbabweans waited in long queues for cash on Friday, hoping to scrape together enough to hold whatever celebration they can afford. Lengthy queues have been a part of life in Zimbabwe during this time of the year.

But on Friday, the queues became longer and the chaos in the city centre in Harare was unbearable.

For many, after waiting for cash at banks, automatic teller machines (ATMs) repeatedly ran out of money on Friday and yesterday as workers tried to cash their annual bonuses, many people just gave up and went home.

Friday was effectively the last banking day ahead of the holiday weekend, which led to queues that snaked around blocks in downtown Harare as people hoped to get cash from ATMs.

The queues were only a problem for people who had money in the first place. The average Zimbabwean’s disposable income remains over 50 percent below the Poverty Datum Line. The celebratory mood usually synonymous with this period is conspicuously absent.

Critics attributed this gloomy outlook to the economic constraints faced by the citizenry in a country fighting to revive an economy shattered by a decade of hyperinflation blamed on Mugabe’s previous administration.

But for some, the abrupt declaration of Monday as a holiday did little to discourage people from hopping in their cars or on busses, resulting in traffic chaos throughout the city centre.

Those who held off their Christmas shopping until the last minute in a bid to bag some bargains were left stranded after banks complied with the presidential decree.

And with Christmas falling on a Tuesday this year, the idea to make Monday a holiday was meant to give shoppers benefit from an “extra” weekend to buy presents, but it ended in disaster.

“I don’t know what to do now,” said Joice Moyo, a shopper from Ruwa who was stranded after finding her bank jam packed on Friday. I thought I would withdraw money today and buy presents for my three kids, but I can’t anymore. What do I tell the kids?”

She has no ATM card, and the bank opens on December 27. “I thought I would come on Monday, but I hear its now a holiday.”

James Harris, a manager at a shop in Harare said:

“The sales have been quite flat and we have people complaining about banks closing. The run-up to Christmas has been quite poor and I believe it has a lot to do with the extra day this year. We are expecting to see it start picking up today but sales are just flat right now.”

Martha Mutopa, a shop attendant in downtown Harare, agreed sales had been sluggish but said shopping had picked up considerably, although people were spending very little. “Generally, the economic climate has been very difficult.”

For many, it will be another bleak festive season.

While Christmas is usually a time of bustle, full chicken roasting in the oven, a Christmas cake, presents to wrap and carols around the Christmas tree with children, this year everything about Christmas is an effort.

Most civil servants who make the majority of the formal work force in Zimbabwe say the $300 salary they are on, even with the bonus, is not enough to bankroll a merry Christmas. They say their salaries remain out of sync with the Poverty Datum Line (PDL), currently pegged at $546.

“There are school fees next year to deal with, we can’t afford to be extravagant,” said a civil servant who declined to be named. Most people employed in the formal sector said they got some days off during the holiday week, but didn’t have enough money to take their family to visit relatives in their home village.

During the holidays, many city-dwellers travel to the villages where their families live. Because of the low demand for transport, bus fares have largely remained stagnant and there are enough buses running this year.

But buses from South Africa have shot up, some three fold, with a trip from Johannesburg to Harare going for anything up to R1 400. Daily News

Tsvangirai on politics and personal life