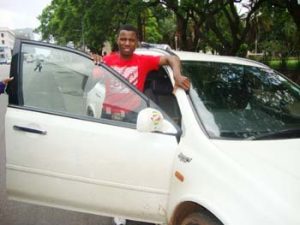 KWEKWE — Peter Moyo (22) who took over the reins of Utakataka Express after the death of his father Tongai “Dhewa” Moyo last year, appeared before a Kwekwe magistrate on Tuesday to answer to charges of theft, assault and malicious damage to property.

Moyo appeared before magistrate Letwin Rwodzi facing charges of assaulting Ngonidzashe Gwatswaire and Leslie Madovi at Lot 4a, Plot 15 in Sherwood Block, Kwekwe, following a dispute over ownership of the piece of land. The piece of land was allocated to his late father under the land reform programme.

The “Young Igwe” as Moyo is affectionately known, also faces charges of allegedly stealing a toolbox containing an assortment of spanners and a hydraulic jack valued at $130 from a commuter omnibus belonging to Emmanuel Madovi.

Moyo is also being charged with malicious damage to property as defined in Section 140 of the Criminal Law (Codification and Reform) Act, Chapter 9:23 after he allegedly damaged the exhaust pipe of a tractor belonging to Gwatswaire. He was remanded out of custody to January 9 next year. Rugare Guvava prosecuted. NewsDay