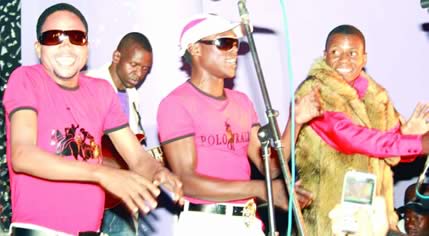 There’s no stopping for Utakataka Express band following an accident at the weekend in which four of its members were seriously injured and hospitalised. The group has since engaged session musicians to continue holding shows while the four receive treatment.

The four only identified as Prince, Dickson, Saviours and Manuel were returning from Gokwe where they had performed at the Unity Gala. Band manager Sukoluhle Dube said they have contractual agreements to fulfil and have since roped in two drummers for trials.

“There are two drummers on trials. We are definitely going to recruit one to stand in for Prince, who is still in hospital,” said Dube. Prince, who is Utakataka Express’ drummer, suffered fractures to both legs in the accident. “Besides the setback we are raring to go, the gigs will go on as planned,” Dube said.

Dube said they would take good care of those in hospital. The band’s next assignment is on December 21, where they will be part of the “Shut Down” gig, featuring Alick Macheso, Leonard Zhakata, Jah Prayzah and “Talk of the Town” Beverly Sibanda.

Dube added that the band was fully booked this festive season and would continue staging shows. “The Utakataka beat will not change, we will find capable replacements,” said Dube. Since its inception in 1996, Utakataka Express has been victim of misfortune.

In the late Tongai Moyo’s days, the band was involved in road accident in 2000 and their entire instruments were destroyed. Moyo also lost a Mazda B 1800 which was used to ferry equipment. Nevertheless, Tongai assembled a new Utakataka Express outfit and went on to release the album “Samanyemba”.

In 2006, Moyo lost a Ford Spectrum minibus, about 40km out of Kwekwe. This was after the vehicle developed an electrical fault and caught fire and musical equipment worth thousands of dollars was lost.

In 2009, Utakataka Express co-manager Jacob Chosa died in hospital after being involved in an car accident driving Tongai’s truck. On October 15, 2011, the band lost the captain of the ship — Tongai — after he succumbed to cancer and his son Peter took over the reins.

Peter was involved in an accident when the Mitsubishi Chariot he was driving was hit by another car on his way to his father’s burial.

While Peter emerged unscathed, the driver sustained injuries and was rushed to Kwekwe General Hospital for treatment. It remains to be seen if he will rise from this latest setback like his father used to do.