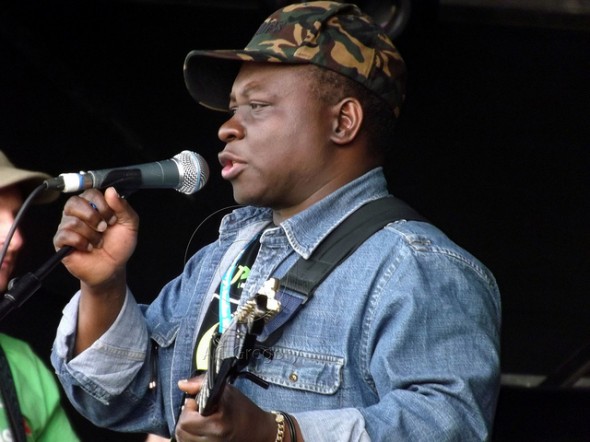 From playing with Madonna to an Edinburgh homeless shelter.. the rise and fall of The Bhundu Boys.

THEY played to 240,000 fans over three nights at Wembley. The Bhundu Boys were already one of the most famous African bands of all time but, supporting Madonna in 1987, their career was set for take-off around the globe.

Guitarist and founder member Rise Kagona, 49, remembers that the band had never played in front of so many people before. He said: “The atmosphere was electric. “We supported Madonna along with Hue and Cry. She was really friendly and would come to our dressing room to speak to us after we played.

“We were told she specifically asked for the Bhundu Boys to support her on the tour.”

But nearly 25 years on from those heady days, life has changed dramatically for Kagona. The band, once tipped to conquer the world, fell apart in a blizzard of bad luck, worse management and tragedy as bandmates succumbed to Aids, mental illness and suicide.

Kagona spoke to the UK Sunday Mail at the homeless hostel where he now lives in Leith, Edinburgh. Kagona said: “I was born in Malawi but moved with my family to Zimbabwe when I was a baby.

“Zimbabwe was Rhodesia then and, growing up in the townships, we would listen to traditional jit and lots of British music. I liked Thin Lizzy, Led Zeppelin and Black Sabbath. I would try to replicate their sounds on the home-made banjo I had but it only had three strings so it didn‘t work out too well.”

The Bhundu Boys recorded their first single in 1983 in Harare and, as their reputation grew, they came to the attention of Elias and Veitch, who were trying to promote African music in Britain. They’d had little success so asked the Bhundu Boys to come to Britain and tour in an attempt to promote the sound to a wider audience.

Kagona and his bandmates jumped at what they saw as a chance of a lifetime. He said: “It was weird arriving in Britain because we’d never been around white people. We were segregated in Rhodesia. “I remember wondering whether anyone in Britain would dance to our music.”

The Bhundu Boys’ first gig was in Glasgow and, although their jit style of music was unheard of in Britain, within a year they were snapped up by Warner and asked to support Madonna. Kagona said: “We were even invited to meet Robert Mugabe at the Zimbabwean Embassy in London for tea.”

The star later fell foul of the dictator after criticising him publicly. His comments lead to Kagona gaining refugee status in Britain because it was deemed too dangerous for him to return to Zimbabwe. The rise of the Bhundu Boys had been meteoric but the band’s fall would be equally dramatic.

Despite receiving critical acclaim for albums Shabini and Tsvimbodzemoto, their first recording for Warner, called True Jit, was not well received commercially. The band continued to make albums and tour but, during the following years, they began to argue and the group eventually fell apart.

His life is a far cry from sharing a stage with one of the greatest pop stars of all time. But, 10 years on from his beloved Bhundu Boys splitting up, Kagona is enjoying life in Scotland and wants to resurrect his musical career. The Bhundu Boys burst on to the pop scene in 1986 after being brought to the UK from Zimbabwe by Owen Elias and Scot Doug Veitch, who ran the record label Discafrique.

The Bhundu Boys had grown up together in a township in Harare and, within a year of relocating to Britain, they were being hailed as one of the most unique and exciting bands ever to come out of Africa. Their pioneering music was a style called jit, which is a fusion of Zimbabwean chimurenga, rock and roll, disco, country and pop.

One of the most contentious issues was the purchase of a house in London which used up most of the Bhundus’ £80,000 advance from Warner. Kagona wanted to keep the money and put down roots back in Zimbabwe but he was outvoted. He said: “Over a period of time, we were ripped off by people.”

Aside from money problems, there were several tragedies. In 1990, lead singer Biggie Tembo was asked to leave the band and, five years later, he hanged himself in a psychiatric hospital. The Bhundu Boys continued but there was more grief when bandmates David Mankaba, Shepherd Munyama and Shakespeare Kangwena all died of Aids-related diseases.

Deeply religious, Kagona has never drunk alcohol, smoked cigarettes or taken drugs and he looks at least a decade younger than his 49 years. He has been living in Edinburgh since 2001 and, although officially homeless, he is happy and looking for gigs for his latest venture, The Jit Jive Band.

Kagona said: “The days of playing on the same stage as Madonna are long gone but, as long as I can play my guitar, then I’m happy.” Daily Record & UK Sunday Mail

Zanu PF can’t stop an idea whose time has come