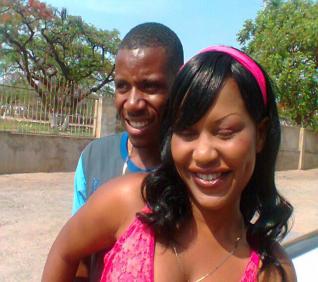 Utakataka Express frontman Peter Moyo’s ex-girlfriend died in a car crash along Borrowdale road last week Friday. This led to the unearthing of the deceased’s romantic pictures with Peter in a hotel room.

The cozy images were stored in the deceased, 17-years-old – Nothando Paidamoyo’s cellphone and it is not clear how the images ended up circulating via smart phones on Whatsapp. Peter said the pair dated for two months. He did not attend her funeral.

“This girl used to be my girlfriend and we went out for only two months and in those two months she had introduced me to her family. I was shocked when I was also told that she was involved in an accident but I didn’t know that she was still keeping our pictures we took during our affair. We took those pictures some time back in a hotel room where I was having some shows,” said the musician.

Peter added: “Even though we broke up I was touched by her death because she is someone whom I once shared a life with. I don’t think it is a good thing for you guys to publish the story because her family and friends are still mourning.”

The late Nothando’s mother only identified as Mai Moyo confirmed that Peter had a relationship with her daughter but they had broken up at the time of her tragic death last week Friday.

“I cannot say much to you because I am mourning the death of my daughter but Nothando had introduced me to Peter. However, she later told me that they parted ways but my daughter loved him so much and we don’t even know why Peter did not come for the funeral service.

She added: “On the night that my daughter died, I was not at home but I had a very bad dream of her. I then called her on the phone and I asked her where she was but she lied to me that she was at home. After some time that was when I was told that she had been involved in an accident in Borrowdale.

“What pains me the most is that she experienced a lot of pain because she lost her legs and her body had a lot of scars.”

Nothando was an A-Level student at First Academy College in Hillside. She was travelling in the company of an unidentified male friend when the accident occurred. Her male friend also died in the accident. H Metro

Editor: We have been the pictures in our possession but feel it inappropriate to publish them.