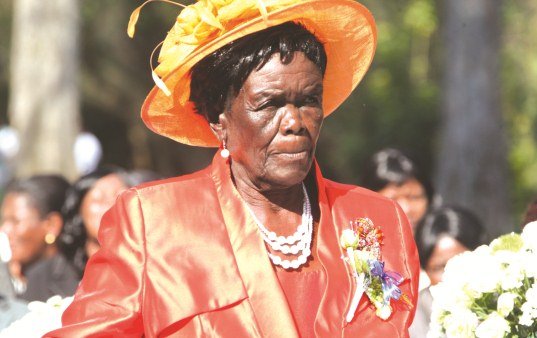 HARARE – Prime Minister Morgan Tsvangirai’s mother Lydia says her son’s ex-fiancée Locardia Karimatsenga must present her grievances to a traditional dare (court) in Buhera and not in the courts of law.

And apparently, she does not object to the PM forming his own polygamous family if he so wishes. She opened up about her son’s recent bitter divorce and expressed her heartache over Karimatsenga’s decision to drag her “husband” to court.

Until now, Tsvangirai’s 80-year-old mother has been quiet on the bitter fight between her son and his ex-wife, which ultimately ended with a judge scuttling his wedding to Elizabeth Macheka earlier this month.

The PM, 60, settled for a wedding ‘ceremony’ with the imposing Macheka, 35, who was with her husband when the Daily News crew arrived at their Highlands home yesterday.

During the hour-long sit down in a veranda of the PM’s airy lounge, Tsvangirai’s mother, flanked by an uncle Philemon Makamure and Robert Tsvangirai, responded to the Daily News’ questions about her son’s failed marriage to Karimatsenga; her elopement to Buhera, her two-month stay in Humanikwa Village, her pregnancy, her relationship with her ex-daughter-in-law, and the subsequent bitter separation that has now spilled into the courts.

Mbuya Tsvangirai appealed to Karimatsenga to come to Buhera for mediation to settle the matter away from the glare of the public.

(We must resolve this in a cultural way. “In our culture, such issues are resolved customarily not through courts of law. I’m pained by all this, I stayed with Lorcadia when she eloped.”

Karimatsenga spent two months in Buhera after a ceremony to welcome her as part of traditional rites that are an integral part of Tsvangirai’s culture. During the in-depth interview, Tsvangirai’s mother got emotional about the bitter break-up that has become media fodder over the past few months.

She said there was no need for Karimatsenga to go to courts of law to scuttle her husband’s wedding to another woman. “Handizvo zvinoitwa, varume vanoroora vakadzi vakawanda (She was wrong, polygamous marriages are officially recognised by society),” she said.

“Akagara Morgan achichema mukadzi wake tikazobvumawo kuti ava kuroora. Haroorerwi necourt. Court vabereki (We have many examples of polygamists in Buhera including Mutsengi who had 15 wives. A woman cannot query why her husband wants to take another wife. Locardia must know that Morgan was married to Susan Mhundwa before she died in an accident. We never consulted the Mhundwas when she eloped to our homestead, so she is out of line when she takes her husband to court before exhausting cultural channels.”

She then cleared up speculation about Karimatsenga’s pregnancy, which she says she lost due to hypertension associated with the separation.