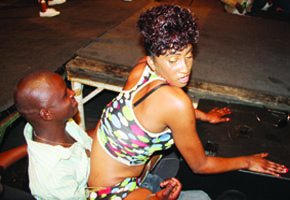 BEVERLY “Bev” Sibanda is the most talked about dancer in Bulawayo at the moment for her controversial “dirty” dancing, which she prefers to justify as art.

The infamous dancer has performed in many night spots in the city where men flock in large numbers, with the married ones lying to their spouses that they are going for drinks with friends only to go and drool at her sexually suggestive moves.

She has attained so much acclaim from these devotees who seem to have been hypnotised by her raunchy dances, failing to note the negative connotations they transmit.

Her enthusiasts appear to be too blindfolded to see that she has defied the whole concept of entertainment — to her art entails inserting a bottle into her private parts, stripping men to briefs, running her hands on men’s private parts, letting them insert their fingers inside her privates, making them lie down while she performs sexual acts on top of them.

Sometime last month, her dances and seductive stage talk provoked a man so much that he striped naked in front of an audience to show that his manhood was not erect after the crowd and Beverly had mocked him for supposedly attaining an erection.

Is this art or sex?

Over the years we have seen the likes of Sandra Ndebele, the Exotic Rhumba Dancers, Girls La Musica and Slizzer performing on stage but there has never been a trace of obscenity — Beverly has upped the game.

It is hard, especially in a society like our Zimbabwean one, to swallow the fact that a woman under her normal senses would willingly let a stranger insert fingers into her private parts, unless the woman is a prostitute. This is an indication that she has no respect for herself and other women’s husbands by letting them touch her privates.

She has given herself access to naked bodies of other women’s husbands which is uncalled for. Under normal circumstances, a married woman should be the only one with access to her husband’s naked body and vise versa but Beverly has come to make a public mockery of the norm.

Beverly’s dirty dancing cancels the enormous strides that the female folk have made in society.

Women nowadays, have been emancipated and are treated with the utmost respect but Beverly seems unaware of such an achievement. Through her dances she continues to portray women as sex objects, always available to satisfy men’s unfulfilled fantasies of a semi-nude woman gyrating seductively on top of them.

Also the aspect of women being of loose morals, allowing themselves to be touched by any man is perpetuated through what Beverly does on stage.

Women will suffer for Beverly’s actions especially when we view the general in the particular; this is when the actions of one person in a particular cell will be held accountable for everyone, (Zonelwa mvunye) and women will forever be labelled as a morally decayed species.

Her acts are a live display of obscene, lascivious and indecent act, denigrating women.

In one of her visits to the city, Beverly shocked all when she put on regalia synonymous with members of the apostolic sects and posed as a prophet before performing a DEMON exorcism ceremony on her fellow dancers, Sexy Angels and male revellers.

The dancer also went on to arm herself with a bible and tactfully touched the Sexy Angels’ privates with it.

After sprinkling “holy” water all over the place, one by one the seemingly possessed Sexy Angels fell to the floor and rolled in sexually inundated moves. This act was a blasphemous one, which calls for a major clash with apostolic sects and religious fanatics.

This is a clear sign that she does not have respect for the Holy Bible that she places on her dancers’ privates; above all, she has no respect for God who is the creator of all.

One would hence wonder if she fears God, like she claims. Over the past months she has courted controversy with her bottle dance and has had a showdown over the abuse of the castle lager bottle where she almost found herself standing in the dock with the country’s largest beer manufacturer, Delta Beverages, who threatened to take her to court.

She, however, did it again last Friday at Club forty 40 where she inserted a Coca Cola bottle in her privates, then later let an unidentified man to drink from it.

One would then say she is a hard nut to crack because after receiving a court warning about inserting a recyclable bottle inside her privates, she goes on to repeat the act once more, in a bid to entertain the drunken crowd. Beverly would soon be answerable for her actions.

Those with a brighter view towards life would agree with me that Beverly is just not a pleasant character. Some patrons shared the same sentiments with me:

“Beverly is an entertainer, we do agree but some things she does are unacceptable. Those acts are as good as pornographic ones and if the wives of some men would see her in the act while their husbands marvel at her, they would file for a divorce. No woman should stand and smile at what Beverly does”, he said.

Another one, who rufused to be identified also said: “Beverly is a disgrace in society. What kind of guts are those that she has? Being in contact with the private parts of other women’s men? This is hogwash and unacceptable”, she said.

If it means dancing, she should dance without creating all these controversies. One would also question her cultural background; where her mentors failed to drive her into the right path. All over Zimbabwe, I have not heard of any culture which supports what Beverly does on stage, save for the normal dances.

My opinion is, she is disregarding her own cultural principles, no elder would celebrate their granddaughter inserting bottles in her privates and letting unknown men touch them. She is setting the wrong standards for her children unless if she wants them to follow her career.

People might ululate at her presentations in clubs but she should introspect and ask herself if those same people care about her. Fathers will see their sons being stripped naked by the dancer, women will see their husband’s privates fondled and what kind of world will come out of all this?

Marriages will be put on the line, family relations will be disturbed, women will forever be called sexual puppets, she will fight with other entertainers saying she is better than them and if all has been said and done, what is the dancer doing about all this chaos?

Being in the media is inevitable, with the advent of technology, videos and pictures of her performances will be taken using the mobile phones and no one can ban any one from using his phone.

Previously she has blamed the media for publishing the pictures but she should know that the media has to play its role of informing people of what happens even behind closed doors, if it is news worth.

Everyone has freedom to information, the media will give the public their right to information and while she performs, she should be intelligent enough to learn that she will be held accountable for her acts.

These videos and pictures will circulate and people will watch, people will talk and naturally it will land in the ears and hands of young children who are still finding their place in society. Children will see their fathers half naked on the front page of local tabloids and they will be stigmatised by other children at school.

What kind of generation is she brewing?

There are up and coming dancers, what standard is she setting for them? Sunday News

Mangwiro wants nothing short of victory