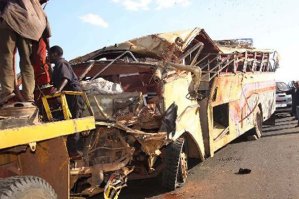 Nine people perished and several others injured when a bus and a lorry side-swiped each other near Kwekwe on Saturday. The Guriro bus, which was travelling from Harare to Kwekwe, attempted to overtake the lorry.

National Traffic Police spokesperson Inspector Tigere Chigome said “The bus, which was travelling behind the lorry, tried to overtake at the 55km peg along the Harare-Kwekwe highway.

“The bus driver realised there was an oncoming vehicle and attempted to get back into his lane, but the bus side-swiped the lorry and both drivers lost control of their vehicles causing both vehicles to veer off the road,” he said.

Chigome said “Eight people from the lorry and one from the bus died on the spot, taking the number of deaths to nine. The number of the injured is not yet to be ascertained as the number of passengers in both vehicles is not known.”

All those injured in the accident were ferried to Harare Central Hospital. Meanwhile, six people died on Friday after a commuter omnibus they were travelling in collided with a CAG bus in Mutoko.