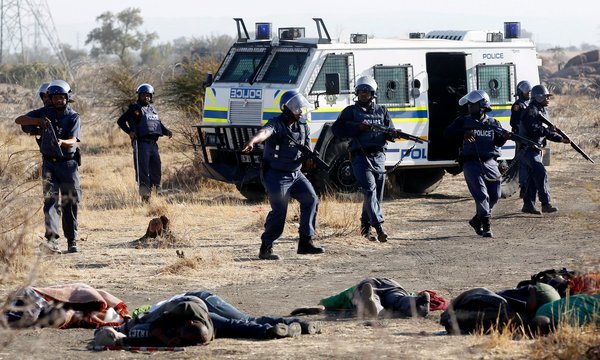 SA miners charged with murder of colleagues killed by police

By David Batty and Agencies

The 270 miners arrested during violent strikes in South Africa have been charged with the murder of their 34 colleagues who were shot dead by police.

The murder charge – and associated charges for the attempted murder of 78 miners injured at the Marikana mine near Johannesburg – was brought by the national prosecuting authority under an obscure Roman-Dutch common law previously used by the apartheid government.

The move came as the men appeared in court charged with public violence over the clashes at the Lonmin platinum mine on 16 August when striking miners armed with clubs, machetes and at least one gun allegedly charged police, who opened fire.

Julius Malema, the former African National Congress Youth League leader, who has called for President Jacob Zuma to resign over the “massacre”, told supporters of miners outside the courthouse that the charges were “madness”.

Malema, who was expelled from the ANC four months ago, said: “The policemen who killed those people are not in custody, not even one of them. This is madness. The whole world saw the policemen kill those people.”

Frank Lesenyego, spokesman for the National Prosecuting Authority (NPA), said: “It’s the police who were shooting, but they were under attack by the protesters, who were armed, so today the 270 accused are charged with the murders [of those who were shot].”

More than 150 of the arrested miners have filed complaints that they have been beaten up in police cells by officers, according to the Independent Police Complaints Directorate.

Directorate spokesman Moses Dlamini said the complainants accused police of beating them with batons and fists and kicking and slapping them to force them to give the names of miners who hacked two police officers to death in a week of violence preceding the shootings.

Eight other people were killed, including three miners and two mine security guards whom striking miners burned alive in their vehicle.

Pierre de Vos, Claude Leon Foundation chair in constitutional governance at the University of Cape Town, wrote on his blog that he could not imagine the NPA really believed that “any court will find the miners guilty of murder for the killing of their comrades by the police”.

Police commissioner general Riah Phiyega has faced criticism for saying that her officers “did nothing wrong” and acted in self-defence. Less than one in 10 Lonmin miners turned up for work at the mine on Tuesday, the lowest level since workers returned to work following the clashes. Violence has since spread to Lonmin’s other operations.

The firm said 8% of its 28,000 workers showed up as union protests continued. Lonmin had initially threatened to sack striking workers. Malema said on Thursday that black South Africans are worse off than during apartheid and called for a campaign of nationalisation in South Africa including all iron, platinum and zinc resources.

Staging his political comeback from a liquidated gold mine, Malema launched what he called a “revolution in the mining sector”, according to the Independent.

He told mineworkers not to trust the ANC government. “Every mine had a politician inside,” the 31-year-old said. He added that all miners should be paid a minimum of 12,500 rand (£930) a month, three times the current rate. Guardian

ANC suffers another setback as land expropriation bill is defeated