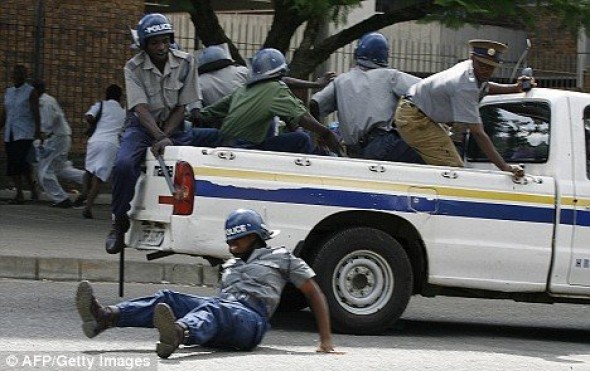 There was “action-packed comedy” when a commuter omnibus operator assaulted police officers in Bulawayo’s Luveve 5 suburb accusing them of demanding a bribe. The operator, identified by friends as Mr Mandla Ncube, was reportedly stopped by police officers just after the railway line at Cowdray Park at about 11am on Sunday.

“They demanded R20 bribe from him but he refused to pay, arguing that he had already paid about R60 in bribes since the beginning of the day,” said a commuter omnibus driver who declined to be named. The drivers said the officers detained Mr Ncube for almost two hours and he still refused to pay.

“His passengers ended up going into another kombi. Seeing that Ncube was prepared to spend the whole day at the roadblock, the officers called for a Quicks Breakdown Truck to tow his vehicle to the Vehicle Inspection Depot (VID). Whenever a car goes there it may take sometime before it is released,” he said.

Another driver said when the breakdown truck was on its way and the police told Mr Ncube that he would have to pay $65 towards towing expenses, he went berserk. “There was mayhem as he lashed out at the officers and they scattered into a nearby bush. It was very funny to see the officers running for their lives with their bibs flying,” said the driver, laughing.

Another driver said: “Police officers were sent scurrying for cover, stuntman style, when Ncube set upon them. The agility they displayed was amazing for people of their huge size.” The officers reportedly left behind a bag in which they kept “fines” that were being paid by motorists at the roadblock.

“They were in such a hurry to get to the relative safety of the bush that they also forgot their ticket book, a pair of handcuffs and a couple of batons,” added another driver. The driver said Mr Ncube then snatched the bag that had the money and drove to Police Traffic West in Mpopoma to make a report.

“We do not know what transpired at the station but in less than an hour, Ncube was back on the road. The roadblock was dismantled for the day,” said the driver. When Chronicle caught up with Mr Ncube, he declined to talk about the issue. “I cannot say anything to you, whoever told you the story should give you all the details,” he said.

Contacted for comment, the acting police spokesperson for Bulawayo, Assistant Inspector Ndlovu, said police did not have a record of the assault. “We have not received a report about a person assaulting police officers and surrendering money at Bulawayo Traffic West,” said Asst Insp Ndlovu.