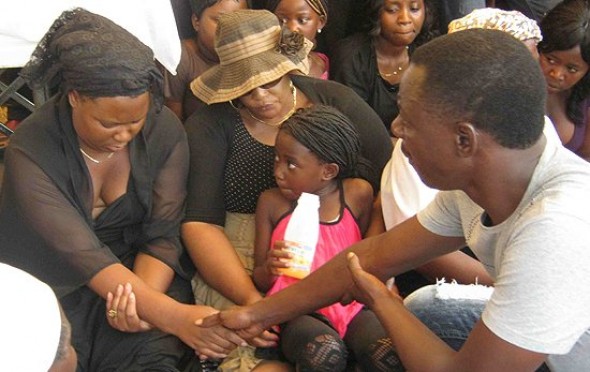 Peter “Dhewa” Moyo has opened up on the reasons Miniehle Mukweli, his father’s widow, moved out of their rented home in Msasa, Kwekwe.

The firebrand Utakataka Express boss said Miniehle failed to stay true to the traditional custom of staying single for a year before moving on. He said she moved out of her own volition because she felt that a year would be too long a time for her to wait until she hooked up with someone.

Peter said Miniehle had made it clear during the family meet­ings soon after Tongai Moyo’s burial in Sesombe last year that she would be unable to mourn for a year since she is young and willing to move on.

“Soon after the burial, my mother said she was only 26 years old and thus could not stay single for a whole year. She said she had been faithful to Tongai and stayed true to him during the most desperate of times, but could not continue to be punished even after his death,” said Peter.

The Young Igwe, as Peter is affectionately known by his legion of fans, said he believed Miniehle realised that she was putting all the children in a difficult spot, including himself as the eldest son and bread winner, by continuing to stay with them.

“I could not ask her about her relationships with any man. Remember this is my mother, together with five other children. We were all left in her care as the last surviving official spouse and we accorded her that respect.

“It was up to her to accord us, especially the grown-ups, some degree of respect by not doing things that would incense us or confuse the children, which is why I believe she moved out,” explained Peter.

The young Utakataka Express front­man said Miniehle had wanted to leave as early as February this year, but he had to beg her to stay for the sake of the children and the family’s image, and also to ensure that she did not leave without a business or job to keep her going.

“If we had left it entirely to her, she could have left by February, but I wanted to set her up first. She told me she would be comfortable as a cross-border trader and we provided her with the capital and she seemed to be doing well when she left,” said Peter.

Miniehle, who had one child with the late Dhewa, took her only child Natasha, who is in Grade 2, leaving behind the rest, some of whom are the same age as her daughter.

However, Peter said Miniehle had requested to take her young daughter with her, to which the family obliged, but Natasha’s welfare would continue to be the responsibility of the Kwekwe-based musician.

“I will continue to pay school fees and other related expenses for Natasha just as I look after the rest of the kids who are staying with me at the moment. I have had to hire two maids, one specifically for the kids especially when schools are open and the other for the rest of the duties.

“There are currently eight of us at home with four school-going children who need very close attention, which I’m unable to give them because of the busy schedules that I have to follow,” said Peter.

Efforts to get a comment from Miniehle, known as “Ndiro Yababa” after one of Dhewa’s songs, were fruitless as her mobile phone was unreachable. However, the young widow did not give reasons for leaving home when earlier contacted.

“Who gave you my number? Ask Peter, maybe he might know if they kicked me out of the house. What I know is that I moved out peacefully. We are in good books,” she was quoted as saying in a local publication.

However, there are reports that Peter was in the habit of dumping all responsibilities on desperate Miniehle, refusing to buy food or pay rent and other bills.

Other reports also claim that the recently completed Mbizo house had also become a source of problems in the family after Peter told Miniehle that she would only be able to use a single room at the high-density residence.

Peter, however, vehemently dismissed the reports as lies. He said had Miniehle stayed he would be gladly moving with her to the newly completed and furnished house at the end of this month.

“I only fulfilled my late father’s dream of completing the house, but surely he would turn in his grave if I barred anyone, espe­cially his beloved wife, from staying in that house or giving her any restrictions whatsoever,” said Peter.

Meanwhile, Peter has conceded that he would be forced to accept Shiga Shiga back into the Utakataka Express fold if people continue to ask for his return.

Peter was speaking at a recent sold-out show at Mushandira­pamwe Hotel in Highfield where Shiga Shiga, who earlier this year joined the embattled and struggling Energy Mutodi, joined the Kwekwe-based outfit on stage.

Shiga blended well with his former band singing most of the songs that his replacements have failed to master, much to the delight of the fans.

Just when the chanter was about to leave the stage, Peter asked (Macheso style) if he should bring back the talented Shiga and the response from the crowd was a thunderous approval.

In an interview soon after the performance, Shiga would neither confirm nor deny the possibility of a move back to Utakataka. He, however, said he was pleased that Utakataka fans had finally forgiven him for his move.

“This is a good sign because earlier I was afraid of coming to Peter’s shows for fear of being victimised. What I can say for now is that we have shows lined up where Mutodi Express and Utakataka Express will be shar­ing the stage,” said Shiga. Sunday Mail