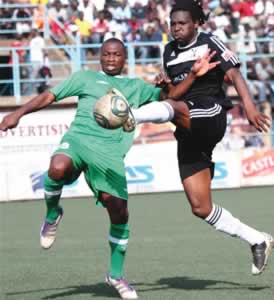 Kelvin Kaindu’s Highlanders have smashed all records, since the turn of the millennium, with their unbeaten start to the season, but the Bosso gaffer says the Promised Land is still too far away and there are too many hurdles along the way.

Some Bosso fans, charmed by their team’s 17-match unbeaten start to the season, the best by any team since the turn of the millennium, have started to suggest that the Class of 2012 could turn into the Immortals by completing the campaign without tasting defeat.

No domestic Premiership team has managed that feat, since an organised national top-flight football league was unveiled in this country in 1962 with Bulawayo Rovers being crowned the first champions.

The closest a local side has come to touching immortality was in 1976 when DeMbare won the league and four of the five domestic knockout tournaments, including an 8-1 thrashing of Zimbabwe Saints in the Castle Cup final and 8-0 win over Chibuku in the Nyore Nyore Cup final.

DeMbare were also crowned the champions of Southern Africa, during that year, after a 7-6 aggregate victory over Orlando Pirates of South Africa. The only blot on their otherwise perfect season was the loss to Saints, in the semi-finals of the Chibuku Trophy.

Highlanders have for years questioned Dynamos’ claims to greatness, in that year, after Bosso pulled out of the mainstream league and formed an eight-team South Zone Soccer League that featured teams from Bulawayo, Gweru, Plumtree and Gwanda.

Now Bosso, who finished the first half of the season unbeaten, are yet to taste defeat two matches in the second half of the campaign.

Highlanders’ Zambian coach, Kaindu, whose arrival has helped transform a football franchise that was dormant in the past five years, saw his team produce one of the greatest 45 minutes, by any clubs this season, with a sublime second half show against CAPS United at Rufaro on Saturday.

Bosso powered to a 2-0 victory, helped in no small measure by a stunning team performance that ripped the heart out of the Green Machine with forward Masimba Mambare scoring a memorable double.

Highlanders have now opened a seven-point gap at the top of the table after both Dynamos and Shabanie stumbled at the weekend. DeMbare were held to a surprise 1-1 draw by Blue Rangers, a team they had thrashed 6-0 just a few weeks ago, while Shabanie fell at the hands of Harare City in the capital.

But Kaindu believes the league title race is still wide open and the big prize can be won by any of the teams in to the top half of the Premiership standings.

Kaindu, a modest, soft-spoken and God-fearing man, insists that his technical crew are concentrating on building a strong side for next season and refuses to be swayed into the league title talk.

“Almost every team in the top five has a chance to take the championship,” said Kaindu. “It is still open for everyone. As for us we are not talking about the title but about a team which can do better next year.

“This team hasn’t been doing well for the past seasons and if we can continue to play like we are doing this year then the future is really good for us.”

Yesterday, Kaindu who was enjoying a brief Heroes’ Day holiday and will resume working with his team tomorrow, said the weekend’s match against CAPS United was one of their toughest this season so far.

He hailed the Green Machine as a very strong side that has the capacity to emerge out of the quagmire that has seen them fail to win in their last six matches, including five straight defeats.

“We played CAPS United, it was a good game and probably one of our toughest games,” said Kaindu.

“Despite coming out with a victory, it was a tough game and CAPS United are a very good team and have chances to come out with something this season.”

The Zambian mentor believes God has been guiding his team. “I have always said the only thing that is moving this team is the grace of God,” said Kaindu.

“And I also believe that we have the best players in the league and this has really helped the team.”

Highlanders’ fans have been fantastic this season and on Saturday they painted the capital black and white as busses ferried the supporters from Bulawayo. And, in the end, they celebrated as Bosso stretched their unbeaten run to 17 games.

Another Zambian coach, Tennant Chilumba, whose Hwange team appears to have found their touch again following a slump towards the end of the first half of the season, believes all the teams in the upper half of the league have something to play for.

“The league is still open and even my team on 24 points still has a chance to win the league. I salute Kelvin Kaindu, Masomere and the DeMbare coach. They have really done well and brought excitement to the league and we are also closely following behind. As coaches, we are there to improve the standards of football,” said Chilumba.

Chilumba said the poor patch was due to his players struggling to adjust following their participation in the African Safari. Hwange have started winning matches again and on Saturday held Gunners to a 1-1 draw at home following back-to-back victories against CAPS United.

“It has been a long time since the club last participated in a Caf competition and the players really got excited and forgot the league and this disturbed us. But now they are focused again and I don’t think we would be losing a lot of points again,” said Chilumba.

Buffaloes coach, Saul Chaminuka, also believes the race is still wide open and any of the top eight teams could win the big prize. “Highlanders are consistent and Shabanie and DeMbare are also doing well. But I would say all the eight teams have a big chance and I think it is still very open,” said Chaminuka.

The nomadic coach, who has watched his team lose two games in a row following a fine run, said they were now looking at picking up points in their next assignment against Blue Rangers at home.

“We have only failed to win the last two games but we have to start winning matches. If we had won these games, we would have been second behind Highlanders but that is part of football.

“We will meet Blue Rangers here this weekend. We know they held Dynamos but we are playing Tannex tomorrow (today) in the Heroes Defence Trophy here and the game should help us prepare for the league game,” said Chaminuka. The Herald

The US investor who saved Mugabe