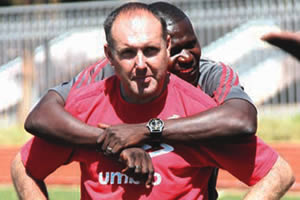 The Green Machine, tipped to make a strong challenge this season in a bid to end seven years of waiting for the premier prize on the domestic football scene, have slipped into relegation waters after four straight defeats.

Yesterday CAPS United were beaten 2-3 by Hwange, who completed back-to-back victories over the Harare giants and the club’s leadership decided it was time to crack the whip. Former Monomotapa coach, Taurai Mangwiro, has been engaged on a caretaker basis and handed the mandate to arrest the slide.

But team doctor Mordecai Sachikonye will be the only familiar face in the team’s dressing room when Mangwiro appoints his assistants today. It appears the back-to-back defeats to Hwange which sandwiched the derby loss to bitter rivals Dynamos were the final straw for the coaches.

Makepekepe last won a league match on June 10 when they beat Hardbody 1-0 at Ascot. CAPS United’s number one target was Norman Mapeza, but the Green Machine didn’t want a showdown with Zifa given that the coach is still effectively employed by the association.

Although Mapeza has instituted legal action against Zifa, after the association employed Rahman Gumbo as substantive coach of the Warriors, he still remains legally bound by his contract with the mother body.

CAPS United president Twine Phiri is a member of the Zifa board and the Green Machine felt it would be improper for them to engage Mapeza with his case with the association still unresolved. Club vice-president Farai Jere announced last night that Connor and his technical team have been axed and Mangwiro will take charge of the club.

His first game will be the tough home tie against high-flying Highlanders who demonstrated their championship credentials with a seven-goal demolition of basement club Quelaton yesterday. Bosso also eclipsed the record set by CAPS United who were unbeaten in the first 15 league games of the 2004 season on their way to the league championship.

As fate might have it, CAPS United’s magical run was ended by Highlanders in a 3-4 defeat in Harare. Jere yesterday said they had given the technical team enough time to get their house in order, but had not been repaid for the faith they invested in Connor and his staff.

“The time has come for us to stop thinking with our hearts but to use our minds and we believe it is in the best interests of the club for us to ring the changes in the coaching crew,” said Jere. “We have a serious problem and every time we are failing to hold on for a result and losing in the closing stages.

“If you count the number of times that has happened this season you will come up with six to seven games and that is a lot of points to lose right at the end’’. Yesterday’s defeat to Hwange was CAPS United’s seventh in the league. The coal-miners got their goals through Daniel Kamunenga and double scorer Gilbert Zulu.

It was after yesterday’s match that the CAPS management felt it was time to act to stem the slide. “lf we can’t hold on and it keeps happening game after game, then it means our coaches have failed to correct it and there is no guarantee they will do so in the remaining games.

“In the circumstances, we have decided to make changes, bring in a new face and give him a challenge to do well in the next six games and see where it takes us.” Jere held a meeting with Mangwiro last night where a deal was thrashed for the former DeMbare winger and ex-national Under-20 coach to take over as CAPS United gaffer on an interim basis.

“Our long-term target remains Mapeza and we would have wanted him to take over right now but he has some outstanding issues, in terms of his contract, with Zifa and we didn’t want to be seen to be fighting the association,” said Jere. “For now we have settled on Tau and we have given him a challenge to try and win so many games.

“He likes the challenge and let’s see where this will take us.

“We are in a crisis situation and it demands urgent decision-making and we have to act before it’s too late. Tau is coming from his challenges at Monomotapa but we believe he left not because of poor results but some house-keeping issues because he had won his last game against Motor Action at Callies.

“It’s the stability he had brought at Monoz that attracted us and maybe, given better support, with better players, he can do better. Tau is also one of the most qualified coaches around.” Jere said they were confident in the quality of players in their squad.

“We believe we have enough good players to compete very well with any club in the league but why we are not getting it right is the big question. Maybe given another coaching team, different strategies and instructions, the players can perform to their best.

“If there has to be criticism on the directors, then I think we can be taken to task for making the changes to the coaching set-up we had at the end of last season. When you look at how we performed in the second half of the season, after we gave Lloyd (Chitembwe) the responsibility, you will see that we were very good.

“Maybe, with the benefit of hindsight, there was no need to make the changes that we made to our coaching team. But we did it thinking it would give us that extra something that we needed to win the league but it hasn’t worked out and the results are there for all to see.

“You feel for the fans because they want to see their team doing well and I remain convinced we have the quality in terms of players and maybe now that we have made some changes things will get better.” CAPS United have badly struggled to fill the big shoes left by Charles Mhlauri who won back-to-back league titles at the club in 2004 and 2005.

The club has tried a number of seasoned coaches but it has all ended in a doomed mission as the quest to win the elusive league title gets harder every year. Northern Irishman, Connor, was a surprise choice for the job given that it was his maiden adventure with African football.

He also arrived at CAPS United stalked by a poor record of having lost 23 consecutive games in his last job in his home country. A poor start, in which CAPS United failed to win in their first four games, appeared to expose Connor’s shortcomings.

Although his team recovered to find stability and post some impressive results, including a 3-1 win over FC Platinum, questions remained about his side’s failure to last the distance. CAPS United continued to run out of gas as if to confirm fears raised by some of the club’s fans, earlier in the season, about the club’s short training sessions.