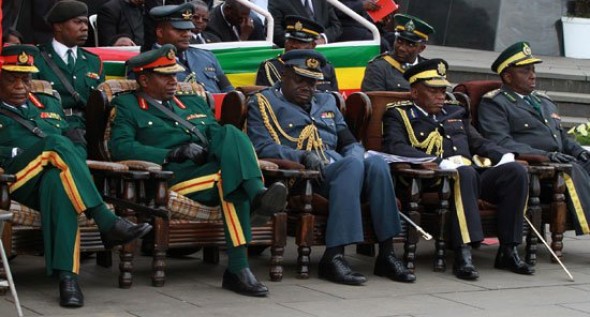 Air Force Commander Air Marshal Perrence Shiri has admitted that the political and economic crisis a few years ago could have led to a coup in some countries, but the armed forces in Zimbabwe remained professional and loyal.

In an interview with the Zanu PF controlled state media last Friday ahead of the commemoration of the Zimbabwe Defence Forces Day set for next Tuesday, Shiri said the role played by the armed forces during that period made a difference between peace and conflict.

“We have all seen how in other countries military forces have caused destabilisation by either taking sides to a political conflict or taking power through military coups.

“To this end, I would like to commend the Air Force of Zimbabwe officers for their discipline and loyalty, which saw to it that economic challenges did not degenerate into a conflict. I thank the officers for their resilience during these trying times that we have gone through. We have been exemplary,” he said.

Shiri meanwhile claimed the operating environment for the air force had been quite challenging because the country is under targeted sanctions. These sanctions he said were meant to make the citizens suffer so that they revolt against the Government.

“The illegal economic sanctions imposed on Zimbabwe by the United States of America, Britain and allies were obviously aimed at hurting the ordinary citizens, reducing our capabilities and ultimately destabilising Zimbabwe.

“The economic hardships were aimed at reducing the quality of life of all citizens so that they can turn against the Government.”

Air Marshal Shiri said sanctions had also come as a blessing in disguise because the air force was compelled to be innovative and creative.

“Our officers, engineers in particular, had to be involved in research and development and as a result they have come up with a number of inventions which have helped us to avert the impact of the sanctions.

“We are now capable of manufacturing some of the spares, which we normally import from the West and we can also do some of the spares supplied from countries in the East because of that technological breakthrough.”

Air Marshal Shiri challenged the youths to join the defence forces and be active in safeguarding Zimbabwe’s sovereignty and territorial integrity. “Youths, the time has come and you should come and take the mandate,” he said.

“We have played our role and it is now up to you to continue building our air force, protecting our sovereignty and territorial integrity.”  Air Marshal Shiri re-affirmed the AFZ’s position as a champion of promoting gender equality.

He said several women played a pivotal role in the liberation struggle, including Vice President Joice Mujuru who was known as Teurai Ropa and Zanu-PF Women’s Affairs secretary Oppah Muchinguri.

Several women officers have been sent to African Union and United Nations peace-keeping missions in countries such as Sudan, Liberia and the Ivory Coast. “These women officers have acquitted themselves well and have proved to be better and effective in peacekeeping,” said Air Marshal Shiri.

He said although the main purpose of the force was to protect territorial integrity and sovereignty of the country, it also has secondary roles. The roles include operations in responding to disasters such as flooding, drought, road traffic accidents and search and rescue.

“We have the manpower, equipment and trained personnel who are available when any disaster situation arises. Last year we carried out 10 missions involving humanitarian assistance. You remember the Ngundu bus accident, we had to go there and airlifted injured people to hospitals, said Air Marshal Shiri.

The air force has also embarked on various community assistance programmes throughout the country including the Murongwe Primary School project in Dande, Mt Darwin.

Engineers form the air force are constructing classroom blocks, teachers’ houses and a computer lab at the school to ensure basic education to pupils in the remote area. The school was made up of grass-thatched pole and dagga classroom blocks, with the pupils sitting on the dust during lessons.

Shiri meanwhile is the same man who led the ruthless Fifth Brigade army unit which slaughtered over 20 000 mainly Ndebele speakers in the Matabeleland and Midlands provinces in the 1980’s. Genocide Watch has since classed the massacres a ‘genocide’ and called for the perpetrators including President Robert Mugabe to be prosecuted.