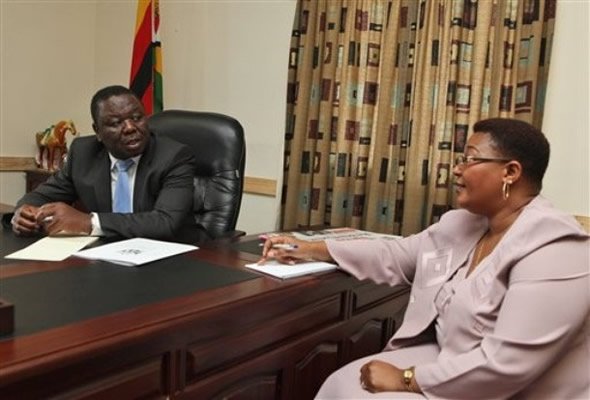 HARARE – Prime Minister Morgan Tsvangirai’s MDC says its Deputy President Thokozani Khupe will be one of the two running mates for the party in presidential elections scheduled for next year.

“We accept the principle of running mates as we are a democratic party. Our leader Morgan Tsvangirai said he does not want the burden to fall on him alone, but he wants democracy to prevail in the party and we all agreed that our Deputy president Thokozani Khupe will be the running mate,” said Biti answering questions on the issue from journalists.

Biti however, took his time to answer the question on running mates. He had to briefly seek the opinion of his colleagues — Douglas Mwonzora, Jessie Majome, Joel Gabbuza and Amos Chibaya — before answering the running mates question.

The issue has reportedly caused fissures in both MDC and Zanu PF as it touched on the controversial succession question. Gabbuza was also officially introduced as the party’s new deputy spokesperson, replacing Tabitha Khumalo who was booted out last month under a cloud.

Clause 5 of the draft constitution stipulates that the presidential candidates will nominate two running mates. Biti said his party will not accept any alterations or amendments to the draft as the time for negotiations is over and is looking forward to the referendum and urged Zimbabweans to vote “yes” for the draft constitution.

“It’s a superior document that the document we have which purports to be our constitution. We are going to urge our supporters and Zimbabweans to for this draft constitution in the referendum,” said Biti.

“It was a long and acrimonious decision that we accepted the draft constitution, we are going to leave the people of Zimbabwe to be the referees of this draft rather than leaving it to one political party but we think it’s a good document,” said Biti.

In addition he said, “I have studied many constitutions in the region including that of South Africa, Ghana, and Namibia that are considered to be democratic but this draft is equally good,” he added. Zanu PF is still to decide whether to accept the draft constitution and is meeting next week on Wednesday to come up with a decision. Daily News

Mugabe can be prosecuted