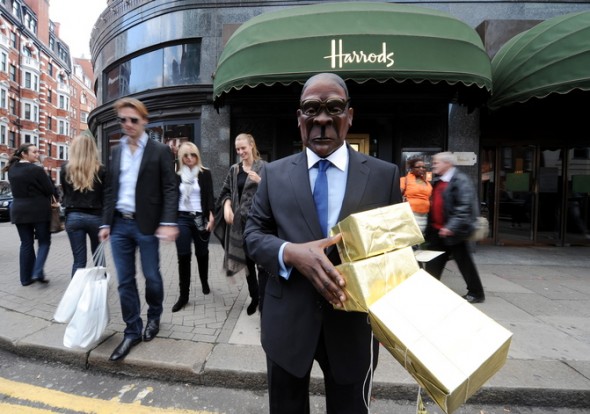 Londoners welcomed Olympic visitors from all over the world. And being in the centre of the capital we at the Vigil saw people from many different nationalities as they passed on their way to see the end of the cycling road race in The Mall, less than a mile from us. Many expressed interest in our cause and signed our petitions.

The Vigil promises an even warmer welcome for the Zanu PF people delisted from  targeted sanctions under the EU’s promise to suspend some of the measures if the constitution referendum is held satisfactorily. (Even if it is rejected?) As we expected, Zanu PF has spat on the EU’s offer. Their spokesman Rugare Gumbo said: ‘It’s all nonsense . . .  their decision on sanctions makes no difference’ (see: http://www.zimbabwesituation.com/jul26_2012.html#Z25 – The Lifting of Zim Sanctions and the Shape of Politics to Come). So much for the damage caused by sanctions!

The UK government may think these rogues are acceptable but we don’t and will try to give them a suitable reception if they come here, as we have done recently for President Sata of Zambia and King Mswati III of Swaziland. We will follow them wherever they go, broadcasting their crimes. Indeed, we are exploring ways of getting them arrested on human rights charges. THE VIGIL WILL BE GRATEFUL TO BE INFORMED OF ANY FORTHCOMING VISITS BY THESE NEW FRIENDS OF THE EU.

As far as the proposed new constitution goes, we’ve received the following email from Vigil supporter Wilbert Mukori asking our position on this: ‘ Zimvigil is an important opinion  maker and many people will be looking to it to help them decide what to make of the new constitution.

In my view this new constitution is not going to do anything to stop the scourge of political violence that has become an integral part of Zimbabwe political life. Zanu PF forced through all the key changes they wanted.

MDC desperately need to see this constitution approved not because they think it has any good things but they need something to show for their four years in this GNU. It would be folly to vote for this constitution just to save Tsvangirai from the blushes for his blundering failures.   What is Zimvigil’s position as regards the new constitution?’

The 3.5 year programme could have been concluded in 3.5 months so that more attention could have been given to the real business: a cleaned-up electoral roll and reformed electoral processes. A check of our supporters could not come up with anyone who had yet read the 168 page constitution – still, no doubt, to be revised – but we have followed the debate about it.

The constitution will no doubt be dumped after the elections and to us it is only as good as the will to respect it. We have no confidence that Zanu PF will do anything but subvert the law for its own purposes as it always has done. One sure way to get rich in Zimbabwe – apart from being a politician – is to bet that the election will be stolen.”

An impassioned response to the draft constitution has come from the dispossessed farmer Ben Freeth in an open letter to the parliamentarians Senator David Coltart and Eddie Cross MP. He says the constitution legitimizes land seizures and racial discrimination.

Senator Coltart replied that he does not like many aspects of the draft constitution but it is the best the MDC can get (see: http://www.zimvigil.co.uk/vigil-news/campaign-news/427-ben-freeths-letter for this correspondence).  The Zimbabwean economist Dale Dore challenges this argument head on and said Zimbabweans must not be blackmailed into accepting the unacceptable (see: What is David Coltart saying? –http://www.zimbabwesituation.com/jul29_2012.html#Z13).

–         Bernard, you suffered silently. Sorry I wasn’t there when you needed someone for support. Rest in peace. – Mai Zhuga (Josephine)

–         It is so sad to hear about your passing. We will miss you. – Hilda Gwesele and Esi Mbaluka from Coventry

–         MDC UK, The Vigil and the Zimbabwean diaspora are not going to be the same without you. So sad you went without saying goodbye. You will be greatly missed. RIP. – Kelvin Kamipura and Fran Toft

–         Bernard we will always cherish and love you. It’s all because of Mugabe. Rest in peace. – Ellen Gonyoa

–         A great friend, you were an army commander against the regime. – Martin Chinyanga

–         Bernard you have left us speechless. Anywhere rest in peace – you will reach home. – Peter Lakatika

A collection was started for his family to which people contributed very generously. We will continue the collection next week. Supporters want to hold a memorial service for him but it was agreed that we should await the Coroner’s Inquest before organizing this. We received an email advising us that memorial services were being held for him at two day care centres in Southwark where he volunteered. It said ‘So many people miss him and talk about him being gentle and kind.’

For latest Vigil pictures check: http://www.flickr.com/photos/zimbabwevigil/. Please note: Vigil photos can only be downloaded from our Flickr website – they cannot be downloaded from the slideshow on the front page of the Zimvigil website.

FOR THE RECORD: 53 signed the register.

The Vigil, outside the Zimbabwe Embassy, 429 Strand, London, takes place every Saturday from 14.00 to 18.00 to protest against gross violations of human rights in Zimbabwe. The Vigil which started in October 2002 will continue until internationally-monitored, free and fair elections are held in Zimbabwe. http://www.zimvigil.co.uk.