Mugabe ready to hand over power if he loses 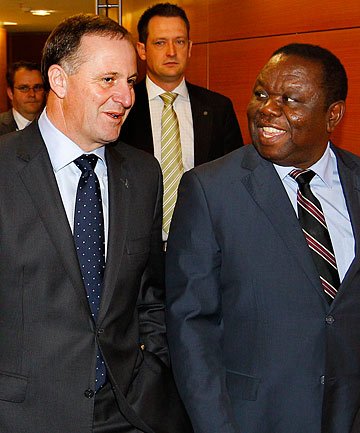 HARARE – President Robert Mugabe is ready to hand over power if he loses the forthcoming watershed elections, Prime Minister Morgan Tsvangirai has said. Mugabe will voluntarily give up his powers and will not seek to subvert the will of the people, Tsvangirai told his New Zealand counterpart John Key yesterday.

Tsvangirai is on the last leg of his three-nation visit in which he first travelled to Japan then proceeded to Australia and New Zealand where he was officially invited by the two governments.

The MDC leader also dismissed talk that the country would descend into chaos in the event of his victory and predicted a smooth transfer of power despite sabre-rattling by Zimbabwe’s security chiefs that they would refuse to recognise a victory by anyone other than Mugabe in the forthcoming general elections.

Appalled MDC leaders have described the military generals’ statement as a “pre-emptive military coup”, annulling the opinions of Zimbabweans even before they had a chance to vote.

Commandeering Zanu PF rhetoric that brands the MDC as a front for whites and British attempts at “re-colonisation”, the commanders say they were “guided by crucial values” — defending the gains of the 1970s war against white rule in the former Rhodesia and ensuring that slain guerrillas did not die in vain.

Tsvangirai — who meets the veteran leader for hours every Monday in a closed-door meeting — said the 88-year-old “will accept the result”, saying he did not “see any reason why he should plunge the country again into another dispute”.

Tsvangirai said Mugabe was “committed for his own legacy and for the legacy of the country to move forward in a stable way”.

“I want to stress from the outset that our problem was never the rank and file of the army, the police or the Central Intelligence officers, most of whom I know are committed to upholding the Constitution of Zimbabwe,” he said.

“It was individuals who felt their personal interests were threatened, whatever those interests are.”

Tsvangirai said he was ‘”confident’” that power transfer will happen without hassles and said no one was keen on replaying the 2008 scenario. “If you want to go back and emphasise what happened, you can never move forward,” he said.

Tsvangirai, who is sharing executive authority with Mugabe in a troubled coalition, said his experiences in the past four years have been a mixture of progress and impediments. “We have managed to stabilise the economy, tamed hyperinflation and given people the reason to hope again,” he said.

“These include media reforms, a new voters’ roll and most importantly; security sector re-alignment. This was meant to realign our security sector to a democratic culture, respect for multi-partyism and respecting the people’s will.”

Zanu PF has been resisting security sector reforms saying this was not a GPA issue and saying there was no clause in the power-sharing pact which provides for security sector re-alignment. Tsvangirai said the public media had failed to reflect the new spirit of inclusivity.

“They have become the new arsenal to malign and to vilify me and my party. The public media have become purveyors of hate speech and sowed divisions, disunity and disharmony in our society,” he said.

Tsvangirai said the Electoral Amendment Bill which sailed through Parliament on July 19 and now awaits presidential assent averts a repeat of the bloody 2008 vote.

“Nothing should ever be allowed to stand in the way of the people’s will and now that we have become a global village, the world should not stand by while gun-toting musketeers instil fear among innocent civilians wishing to elect leaders and political parties of their choice.”

Tsvangirai urged his New Zealand counterpart to lift targeted sanctions imposed on Mugabe and his inner circle as a consequence of electoral theft and rights abuses.

”We would like Zimbabwe to be part of the global community once more,” Tsvangirai said, adding the measures were no longer making an impact. No country can progress with such measures against it,” he said.

Key told reporters Tsvangirai had presented a “compelling case” for sanctions removal and would confer with his Foreign minister Murray McCully.

“If there are free and fair elections held in Zimbabwe why wouldn’t the global community respond in kind and support that new regime? It’s for the people of Zimbabwe to decide who their president and their government is,” he said. “New Zealand just wants to make sure that is fair.” Daily News

Self confessed satanist arrested for murder