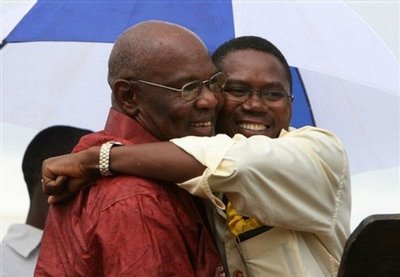 The former Home Affairs minister, who now leads the breakaway Zapu, told the State media that he — with several others — walked out on the octogenarian leader due to frustration with Zanu PF’s dodgy decisions and other ills, including political murders.

“We never lost our identity completely as Zapu and so when these people went to see (Vice President Joseph) Msika and said, Msika, we think things have come to a head, we do not want to be associated with those presidential elections that have just come to an end where people have been killed in order to vote for a presidential candidate,” Dabengwa said, adding this decision was communicated after the bloody 2008 elections won by Mugabe under a June 27 run-off.

The former Zipra intelligence supremo said they were disgusted at being part of an organisation, which killed civilians around elections — hence the decision to pull out of a unity accord put out in 1987 to stop the massacre of Zapu supporters under a military operation code-named Gukurahundi.

In the fascinating interview, Dabengwa said Simba Makoni’s Mavambo-Kusike Dawn (MKD)’s project was not only aimed at preventing Prime Minister Morgan Tsvangirai from getting an outright victory, but also Mugabe.

The plan to split votes was arranged after realisation that the 88-year-old’s determination to run in the disputed election would cost the party and that Mugabe had refused to stand down for a younger cadre to take over.

On the plot — hatched in accordance with other Zanu PF heavyweights including the late Solomon Mujuru and centred on fielding two candidates — the Zapu leader said Makoni jumped the gun by announcing his candidacy to run as an independent.

“Our idea was to make sure there is no winner and we succeeded in doing that. Our thinking at that time was if there is no winner, at the facilitation stage people would come together to an indaba and be able to discuss what is the way,” said Dabengwa.

But it is Dabengwa’s exposé on Zanu PF’s penchant for violence to stay in power that is nerve- wrecking for Zimbabweans, particularly ahead of a watershed election that is almost certain to be the 88-year-old’s last.

In the aftermath of that sham election, churches, civil sector organisations and political groupings claimed the military-led Zanu PF “militias” killed hundreds of people, while maiming and displacing thousands others as the beleaguered party mounted a brutal campaign to overturn Mugabe’s first round defeat to Tsvangirai.

After the Movement for Democratic Change leader had won the March 2008 poll by a narrow margin, he subsequently pulled out of the runoff — citing large-scale violence and this led to the formation of the coalition government.

Dabengwa, who insisted people like him and Msika remained Zapu even after joining Zanu PF, said past wounds would never heal due to Mugabe’s refusal to apologise to Gukurahundi victims and survivors. The closest Mugabe came to taking responsibility for the atrocities was at Zapu leader Joshua Nkomo’s burial in 1999 when he described it as “a moment of madness”.

Senior Zapu military and political officials, including the late Lookout Masuku, were jailed for close to five years during the era when a North Korean-trained military brigade killed 20 000-plus civilians, according to a report by the Catholic Commission for Justice and Peace.

In the riveting exposé, Dabengwa also reiterated that people like Defence minister Emmerson Mnangagwa — then Zimbabwean State Security minister and in charge of the dreaded Central Intelligence Organisation — played a central role in concocting charges against the Zapu leadership. Daily News