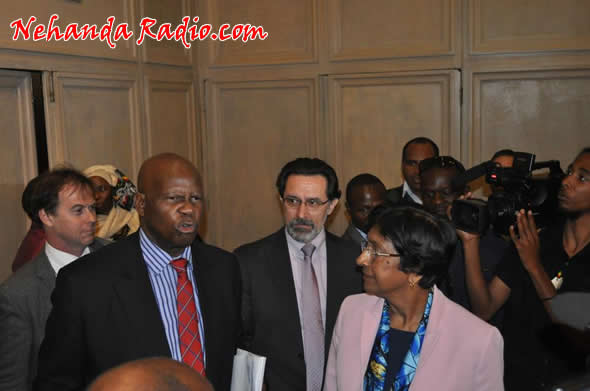 Justice Minister Patrick Chinamasa on Thursday told Senators that by-elections will be held for all vacant seats in Parliament and local authorities instead of just three constituencies ordered by the Supreme Court in its ruling last week.

Minister Chinamasa was responding to a question from Rushinga Senator, Damian Mumvuri (Zanu-PF) who sought to know the implications of the Supreme Court ruling.

“The House needs to know that country-wide, we don’t have three vacancies, but 38 in both the Senate and the House of Assembly. Country-wide, we will have to run harmonised elections for all vacant seats in both Parliament and local authorities,” Chinamasa said.

However, Minister Chinamasa said he was consulting more to grasp the implications of the ruling. “Obviously the rule of law requires that we abide by the judgment. What is important is to consult and analyse what this means to the cash-strapped Government,” he said.

MDC-T Senator for Zaka, Mr Misheck Marava, also asked Minister Chinamasa if the so-called outstanding issues would have been resolved when the next harmonised general elections are held.

Chinamasa claimed it was the President’s prerogative to set the date for the elections even though a power sharing deal which saved Mugabe makes it clear such decisions are made in consultation with Prime Minister Morgan Tsvangirai, who ironically won the March 2008 presidential election.

The Supreme Court last week gave the 88 year old Mugabe up to August 30 this year to publish a notice ordering the by-election to fill in the three parliamentary posts in Nkayi South, Bulilima East and Lupane East constituencies.

Justice Nicholas Ndou in October last year directed the President to ensure the by-elections for the three vacant posts in Nkayi South, Bulilima East and Lupane East are held despite the financial challenges Government is facing.

The President, through Justice and Legal Affairs Minister Chinamasa, submitted in the High Court proceedings that there were more than three constituencies awaiting by-elections.

This, he argued, required US$38 million. In terms of Section 4(1)(e) of the Constitution of Zimbabwe, the Clerk of Parliament notified the three that their membership had been terminated with effect from July 22, 2009.

The Speaker of Parliament notified the President of the development as required by the law on August 17 2009. The President did not make the expected proclamation, prompting the trio to approach the higher court.

Bhebhe, Mguni and Mpofu were elected members of the House of Assembly in the 2008 general election under the MDC ticket and they fell out of favour with their party resulting in their expulsion in 2009