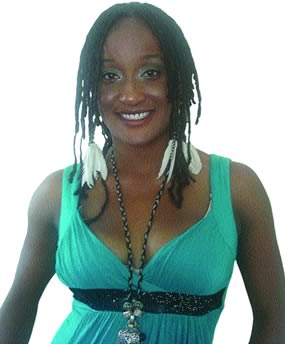 Nadine Brown, widow of the late musician Andy Brown who succumbed to pneumonia in March this year, is carrying on the music torch from where her husband left off by leading The Storm.

Nadine — who was part of Andy’s band The Storm where she was a backing vocalist — said she has been working with most of the members who made up the group The Storm before Andy passed away.

Already a number of well-wishers have been assisting her to hold live shows in and around Harare, so that she can raise money for the release of her album.

We are trying to help her launch her solo career and ensure that Andy Brown’s music empire does not collapse. To date, she has held several shows with the assistance of a number of artistes, with similar backgrounds.

During some of her live shows, she has also sampled some of her new songs on her album “Wakanonoka” set for release next month. The album is a tribute to her late husband and revolves around the rumours which people spread at the time of Andy’s death.

That, however, does not mean that she does not play some of her late husband’s songs. During one of her gigs, she went down memory lane with some of Andy’s hit songs that included “Let The Children Play”, “Mapurisa”, “Gondwanaland”, “Mawere Kongonya” and “Bolivia”, among others.

Although Nadine had been learning the ropes from Andy, she only surfaced following the death of Andy in March this year. A prolific guitarist and composer, Andy died after a short illness. Brown was born on March 15, 1962 in Mberengwa. He did his secondary education at Founders High School in Bulawayo.

Andy first made his banjo at the age of six and would dodge school to play it in the bush. Later, he began teaching himself how to play the guitar.

Having grown up herding cattle and goats, Andy behaved exactly like any other boy whose feet were cut and clothes torn as they scrambled downhill running after errant cows or calves. And when he left the rural areas for the bright lights of Bulawayo, Brown found himself befriending other young boys of mixed parentage and assuming a totally new life and culture.

As a result, Brown’s life was half this and half that. But whatever he did then, music was still at the centre of his life, something that Nadine wants to keep alive.