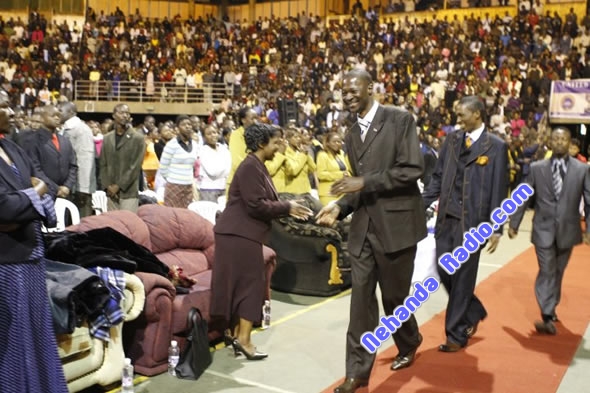 Harare City Council wants Prophet Emmanuel Makandiwa to pay more for the use of the City Sports Centre where thousands of followers of his United Family International Church (UFIC) congregate every weekend, NewsDay can reveal.

Though it could not be immediately established how much the popular prophet was paying, Harare mayor Muchadeyi Masunda confirmed meeting with Makandiwa and two senior pastors from his church on Tuesday, in a bid to come up with what he termed “a win-win situation”.

He, however, emphasised that council must benefit fully from its assets to lessen the burden on ratepayers. “We have to make our assets sweat more in order to generate the much-needed revenue which will enable us to finance the cost of service delivery programmes without burdening the hard-pressed ratepayers,” he said.

“We had a meeting with Prophet Makandiwa and two senior pastors from his church to discuss matters of mutual interest. He was grateful for the use of City Sports Centre, but we need to come up with a plan to work out for the benefit of all of us,” Masunda said during a full council meeting on Thursday.

“I wouldn’t want to pre-empt the negotiations which the joint team has set in motion. Let’s leave it on the basis that we should move from the present sub-economic hire charges to market-related rates,” Masunda said. The mayor, however, expressed gratitude for the role UFIC was playing in the country.

“UFIC is not an organisation to be sneezed at not only in terms of its sheer size numbers wise, but also the pivotal role of fulfilling the spiritual needs of various needs of various of our stakeholders within Harare,” he said.

Efforts to get comment from UFIC were unsuccessful as Makandiwa’s spokesperson, Pastor Prime Kufa, could not be reached despite having promised earlier to respond to questions from NewsDay.

The meeting between Makandiwa and council comes at a time the finance and development committee said it was reviewing council policy on lease rentals for church stands. NewsDay

Sindi van Zyl: The ‘people’s doctor’ who revealed her own struggles