It’s not just the weather making us shiver 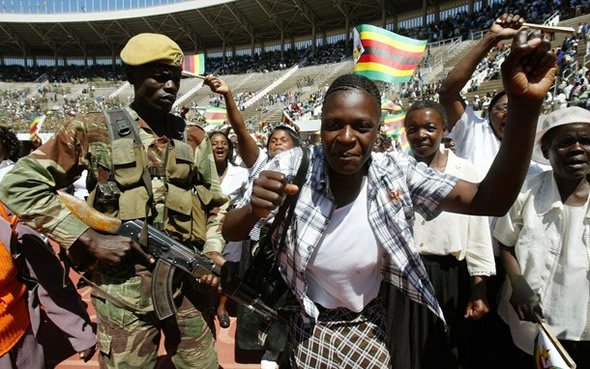 Everything in the path of the frost has been burnt. The last traces of green in the bush and across open plains disappeared and were replaced with tall golden grass. Overnight temperatures have dropped to low single figures with zeroes and minuses already being recorded in the early hours of the morning.

There for all to see, if only you dare look

Can they really afford to throw away 3 or 4 million votes?

The chance to change Paradise

Just after sunrise one day this week I noticed a bird sitting forlornly on the edge of a birdbath in my garden. Thinking there was no water I went to have a closer look only to discover that there was water but it had frozen and was solid ice.

That morning, water in garden taps and pipes was also frozen and people gathered to see ice crystals clustering and hanging on diamond mesh fences. As the sun rose higher that bitterly cold morning we counted the cost of the unexpected freeze.

Vegetable farmers told of tomato crops completely destroyed, lawns went brown overnight and those plants we thought were frost tolerant had been burnt to a crisp. In the same week as winter settled over Zimbabwe, a series of chilling statements started hitting the news.

First came a strange prediction made by the Minister of Justice who was speaking at a public seminar in Harare. Minister Chinamasa said he wasn’t a prophet but that what he was going to say was prophetic. He said he foresaw what he called a ‘war-mongering scenario’ developing as we approached elections.

The Minister said there would be a “tendency to provoke incidences, to overblow them and exaggerate … in order to allow a Syrian/Libyan-type Western intervention.”

Then came news that the Defence Minister had threatened the Finance Minister for refusing to release two and half million US dollars for army recruitment and operational expenses.

When Minister Biti said there was no additional money available and that the government was already in debt, the Defence Minister was reported to have threatened to send army generals to the Finance Minister’s office.

The MDC said the Defence Ministers comments were “unprofessional and a serious threat on the Finance Minister’s life.”

Next came the shocking news that the Public Service Commission had recruited ten thousand new members of staff in the last five months without approval from the treasury.

Speaking in Parliament ,Finance Minister Biti said: “the main culprits are the Ministry of Defence which employed 4,600 personnel since January 2012, and the Ministry of Home Affairs which has recruited 1,200… without treasury approval.”

So, if we understood this correctly, the new soldiers had in fact already been recruited and are even now sitting in the barracks.

The last staggering statement of the week came from 561 new police graduates being reviewed by President Mugabe at their passing out parade in Harare. Addressing the President, the police graduates chanted in unison:

“You are our God chosen leader and we hereby stand by you and remind the EU and its allies that they can rule the rest of the world but not Zimbabwe…” The recruits went on to say:

“we promise that we will spread the revolutionary gospel,” meanwhile the rest of us wondered what was that internationally accepted principle about an impartial police force.

So while police graduates march in the dust and unbudgeted new soldiers sit in barracks, ordinary people shake their heads and wonder why we even need another five thousand soldiers when we aren’t a country at war or involved in anyone else’s war.

It’s not just the weather making us shiver this winter. Until next time, thanks for reading, love cathy 16th June 2012. Copyright   Cathy Buckle.

Zimbabwe draft constitution ‘a test of people’s will’

There for all to see, if only you dare look

Can they really afford to throw away 3 or 4 million votes?

The chance to change Paradise