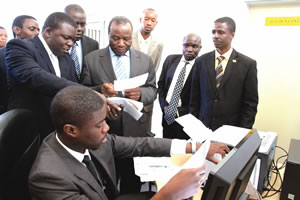 Zinara officials told Minister Goche that 250 000 motor vehicles have been licensed out of an estimated 800 000.

“I want to say if there are no queues now and queues start to come on the 29th and 30th June that’s not a good thing. I don’t think Government can work like that. We cannot continue extending (the deadline) as motorists, including myself, we have a duty to licence our vehicles,” he said.

Minister Goche urged the media to play a role in encouraging motorists to licence their vehicles. “The media has a pivotal role to play in advising motorists that now that an extension was granted let’s not wait to cause long queues and seek a further extension come month-end,” he said.

Over US$10 million missing at ZINARA, “it operates…

Govt okays shoddy road works, ‘it’s what we can afford’

“I want to see people licencing their vehi­cles now. We want to see queues at the licenc­ing offices now. If we see queues coming up to the end of June and we are satisfied that there are still more motorists who want to licence their vehicles that position will be considered at that particular time.”

Minister Goche said Zinara should not be criticised when police start enforcing the law when the extension expires.

Motorists will not be charged any adminis­trative penalty for late licensing before June 30, but those who fail to license their vehicles by then will pay an all inclusive penalty of US$45 in addition to US$20 charged for acquiring the new disk.The penalty com­prises US$20 fine, US$20 arrears fee and US$5 administration fee.

Zimpost managing director Mr Douglas Zimbango added that there are over 200 braches dealing with motor vehicle licencing throughout Zimbabwe.

Over US$10 million missing at ZINARA, “it operates like a tuck-shop”

Govt okays shoddy road works, ‘it’s what we can afford’