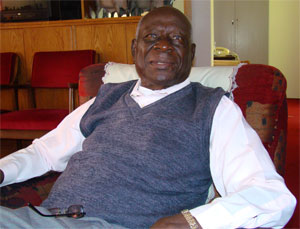 SENIOR Zanu PF officials in Matabeleland have accused Zanu PF founding member and former Defence minister Enos Nkala of committing atrocities against the people of the region before and after Independence.

This was in response to Nkala’s pronouncements this week distancing himself from the Gukurahundi massacres, which left over 20 000 people dead in Matabeleland and parts of Midlands between 1983 and 1987.

Nkala resigned in 1989 from government and Zanu PF in a huff after being implicated in the Willowgate vehicle scandal. He was Minister of Defence at the time.

They labelled Nkala a “sell-out” who always plotted against the late former Vice-President Joshua Nkomo and the Matabeleland region at large.

A politburo member told the Zimbabwe Independent this week Nkala started working against Nkomo as far back as 1957 resulting in the formation in 1963 of the breakaway Zanu from Zapu. According to politburo source, Nkala failed in an attempt to topple Nkomo as Zapu leader and hence his hostility toward him.

“How can Nkala accuse Matabeleland politicians of being spineless when he was the one who planned Gukurahundi and other shameful acts which resulted in the loss of lives of thousands of innocent and courageous people?” asked one politburo member.

But Nkala insisted he never killed anyone when he served in President Robert Mugabe’s government in the 1980s. On reports that he was part of a plot to assassinate Nkomo, Nkala defended himself saying he was in fact the one who had alerted him to the plot and advised him to flee the country in 1983.

“There were plans, I believe, to assassinate him,” said Nkala. “I contacted him to get out and go to London.” Another politburo member said Nkala was a dangerous “mole” who sowed serious divisions even during the liberation struggle.

Nkala is on record making numerous inflammatory remarks against Nkomo and Zapu. He is widely blamed for inciting violence in Matabeleland.

“Some of us are former Zapu and we are in Zanu PF because of the Unity Accord which was signed to stop the mass killing in the 1980s, but Nkala is Zanu PF through and through,” said the politburo member.

Nkala recently held a 45-minute closed-door meeting with Mugabe at the Joshua Nkomo International Airport, sparking speculation that the veteran but ailing politician was set for a rebound in the political arena.

“Nkala will never be forgiven for his role in Gukurahundi because we know he was involved in the mass killings. A lot of people disappeared because of him,” said the senior Zanu PF member. Zimbabwe Independent