According to reports the former Deputy Minister of Labour and Social Services applied to the MDC-T leadership requesting admission and the decision to accept her was made on Monday this week.

MDC-T National Organisation Secretary, Nelson Chamisa is quoted as having confirmed her admission into the party. Last year Mutinhiri lost her parliamentary seat and government job after being expelled by Zanu PF.

MDC-T spokesperson Douglas Mwonzora said: “Mrs Mutinhiri has joined the happy MDC family. We welcome her with open hands and hope that she will find peace of her political mind in the MDC. “I think she was unfairly treated in Zanu-PF . . . flimsy allegations were raised against her and she was victimised as a defenceless woman.”

Asked whether Mrs Mutinhiri will contest in the forthcoming elections, Mwonzora said: “That is all up to the candidate selection set by the election directorate of the MDC. We have not yet selected.”

Mutinhiri’s expulsion followed long running accusations that she was de-campaigning Zanu PF and building a relationship with the MDC-T. Mutinhiri’s troubles are believed to mirror the infighting within ZANU PF.

Her problems started when she and fellow Zanu PF MP for Goromonzi West, Beatrice Nyamupinga, were accused of betraying the party and supporting the MDC-T candidate for Speaker of Parliament, Lovemore Moyo. 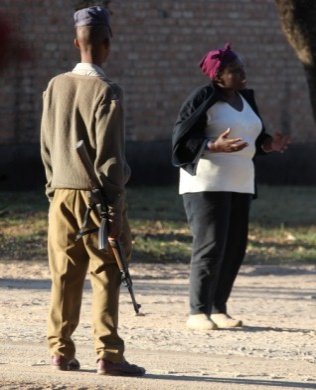 Since then she has had her farm in Marondera invaded by war vets and Zanu PF youths, allegedly sponsored by State Security Minister Sidney Sekeramayi. Mutinhiri at the time hit back and accused Zanu PF of trying to kill her in the same manner that she says Zanu PF had killed MDC-T supporters.

Mutinhiri specifically pointed to the Central Intelligence Organisation (CIO), currently headed by Sekeramayi, and said the CIO wanted to kill her and dump her body in the Wenimbe Dam: “Like they did to hundreds of innocent suspected MDC supporters in June 2008.”

I warned Chamisa not to appeal against Khupe court ruling – Komichi