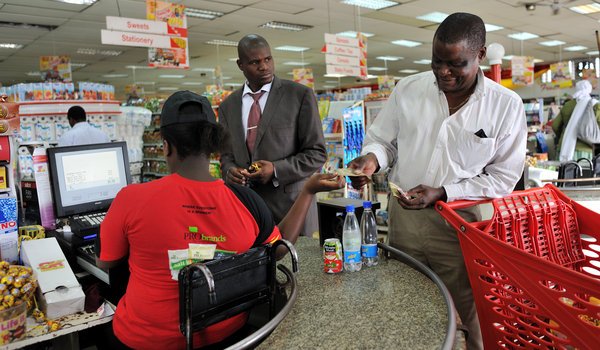 A man went into a supermarket to buy his lunch. His bill came to $4.85, and he handed over a $5 note. There was no change so he had to either pick three sweets or three packs of condoms instead.

But the sweets had run out so he had no choice but to take the condoms. As the teller handed them over, his wife arrived to do her shopping and saw him. “Honey, we don’t use those,” she shouted – and they lived unhappily ever after.

The introduction of the multi- currency system in 2008 certainly improved the macroeconomic environment – leading to lower inflation, increased resource employment and economic growth for the first time in a decade. But it brought about a change crisis.

Bank charges too high due to imported solutions, govt says…

The lack of change has caused distortions in pricing and short changed consumers. Where no approximation is done and exact prices are charged, customers are forced to buy funny small items like condoms, matches, razor blades, bubble gums, sweets, etc.

Some supermarkets tried to be innovative by issuing vouchers, but they force customers to purchase again in the same supermarket. The change problem is also wrecking havoc to those who travel by kombis.

Attempts by the banks to use the R8 million worth of coins imported from South Africa were not fruitful. Retailers rejected the coins, citing exchange rate difficulties. They ended up sourcing the coins at one rate and having to give it out at another rate. The banks eventually returned the coins to South Africa!

US dollar coins would be ideal for the economy, as most transactions are taking place in this currency. The Government promised to source coins from the US in partnership with the Bankers Association of Zimbabwe – but BAZ says it is not aware of any plans to import coins.

I very much doubt we will get these as importation of coins is very expensive. It costs about $2 to import coins worth $1 from the US to Zimbabwe; and players in the banking sector, driven by self interest, would not find any incentive in importing the coins.

Zimbabwe should consider coming up with urgent home grown measures to address the change crisis, such as the use of plastic money. The ideal solution would be to mint our own coins, backed by the US dollar.

Ecuador, which has been dollarized for many years, did this successfully. Zimdollar coins could also be re-introduced. This would cause some problems but they are not insurmountable. The Zimbabwean

Bank charges too high due to imported solutions, govt says it ‘can’t…