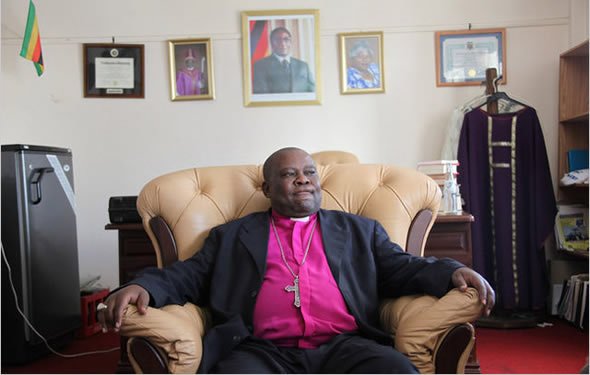 Ex-communicated Anglican Bishop, Nolbert Kunonga confirmed his Zanu PF puppetry after claiming MDC-T leader, Morgan Tsvangirai, is a sell-out who should not be voted into power as he is an agent of neo-colonialism to deny black Zimbabweans access to land and economic empowerment.

Kunonga preached about the holiness of President Robert Mugabe and the ‘satanic’ behaviour of Tsvangirai to a group of disinterested church members and a pocket of Zanu PF supporters at Dimbe Primary School, Chief Svosve area, last weekend. The majority of those present were state security agents from CIO and the army clad in church uniforms.

“MDC-T and its western puppet, Morgan Tsvangirai, are agents of doom fighting to reverse the land reform programme and hand back land to the former colonial white masters. Tsvangirai is also very much against the indigenisation and black empowerment programme.

“He wants to deny Zimbabweans their birthright to the country’s natural resources. Tsvangirai together with other people of his warped thinking should be flushed down the sewerage system come next elections,” ranted Kunonga. He urged people to go ahead and grab land still in the hands of white commercial farmers.

“You are sons and daughters of the soil and should not hesitate to regain land which rightfully belongs to you. Whites like other aliens should not be allowed to own land and other properties in the country as they are strangers. Tsvangirai is a white man masked in black skin. He is like the Biblical Pharaoh who enjoyed the suffering and economic deprivation of his own people. On the other hand, Mugabe is the Biblical Daniel,sent to suffer for the cause of his people.”

Kunonga boasted that he ignited the property grab as he was the first to seize Anglican Church buildings and other assets in Zimbabwe, Zambia and Malawi, startingin 2000.

“I took 3 800 church properties in the region since their title deeds were in my name. There was no way the properties could remain under charge of the church controlled by whites and their black puppets. Bishops such as Julius Makoni, Chad Gandiwa and others are MDC-T and furthered western interests,” he said.

The self-confessed Mugabe apologist, called on ‘true’ Anglicans and other Christians to join forces with Mugabe in coming bloody defence of the country.

“Churches should protect Mugabe’s indigenisation policies, no matter the cost. This world is not for cowards and as Christians; we must gear ourselves for a bloody war against white interests.

“Those who participate in the land grab and future seizure of mines and other properties in the hands of aliens, will definitely enter the kingdom of God. The Prime Minister is good for nothing and only helped to ensure whites take back land and other natural resources from the black majority.

“Elections will give Zimbabweans the opportunity to choose between good (Mugabe) and death (Tsvangirai). Vote wisely. I am a professor in my own right and would rate Mugabe’s governance as ‘very good’,” Kunonga claimed. The Zimbabwean