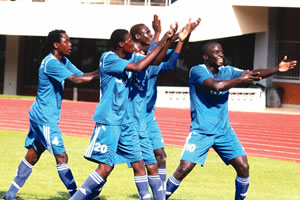 By Roy Matiki in Maputo, Mozambique

Dynamos allowed Liga Muculmana to come from behind twice and snatch a draw in a lively CAF Champions League match first leg, first round tie at Liga Muculmana Ground yesterday.

The match was witnessed by a capacity crowd that included DeMbare fans who had travelled from Harare by road. The Zimbabwe champions managed to get two crucial away goals from the boot of giant striker Takesure Chinyama, who was a vital cog in the Dynamos attack.

Mozambican champions got the goals from Stelio Enesio and Luiz Vaz. DeMbare hit the net in the 21st  minute after Denver Mukamba beat his marker and released the ball to Chinyama who controlled it well  before firing past goalkeeper Brazilian Manuel Oliverira  to take the lead.

On the stroke of half-time, Liga Muculmana levelled the scores after a defensive mix-up between captain George Magariro and youngster Partson Jaure, allowing Enesio to slot the ball past an advancing Washington Arubi.

After haft-time, Chinyama momentarily lost possession before delivering a gem of a goal, to make it 2-1. After the second goal, DeMbare allowed Liga Muculmana to claw their way back into the game.

In the 73rd minute, Muculmana’s second-half substitute Nelson Libisse delivered a perfect cross and it met the flashing header of Vaz, who beat Arubi  who could only watch haplessly as the ball passed him.

The Dynamos defence lacked cohesion and failed to do the basics of defending as they were not communicating effectively. Liga Muculmana mesmerised their opponents with their passing game, slick touches of the ball and mazy runs on the flanks.

DeMbare struggled to keep pace, especially after Muculmana had equalised, as the hosts threw caution to the wind and fired from all cylinders. When Namibian referee Rainhold Shikongo blew the final whistle, there was a huge sigh of relief from the Dynamos family.

Dynamos assistant coach Tonderai Ndiraya said despite conceding two goals through what he termed school-boy blunders, he was happy with the result. Ndiraya was confident that they will finish off Liga Muculmana on home soil because he believes as Dynamos they have a good track record in the Champions League and would at all costs try to preserve it in front of their vocal fans.

He bemoaned that his defenders failed to do basic defending skills, saying: “Our midfielders were not tracing the ball and gave our opponents too much space to operate and the defenders were not communicating. I am happy that Chinyama is improving with each outing and he made the difference today,” said Ndiraya.

Liga Muculmana gaffer Artur Semedo was delighted with his team’s performance and looks forward to the second leg with high hopes. The Mozambican coach praised his players for the fighting spirit and was thrilled with the two goals.

Semedo indicated that when they go to Harare for the second leg, they will not sit back and defend but would go out for an attacking formation. He feels Dynamos’ game plan was to look for a draw and they did not attack as they expected.

“The goals that Dynamos got were lucky and I blame my defenders for not concentrating throughout the match. It’s possible to go to Harare and score goals and dump Dynamos out of the Champions League,” said Semedo.