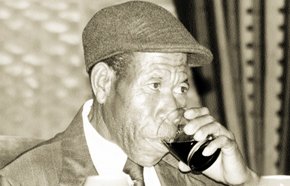 A Harare man has become one of the richest gardeners in the world after receiving a cheque for a whopping US$146 930 for winning the Lotto jackpot two weeks ago.

Mr Witness Office, who has been a gardener for more than two decades, last week got the cheque from the Lotto organisers, Mashonaland Turf Club, at a ceremony held at Borrowdale Racecourse in the capital.

Despite landing the top prize, Mr Office appeared unmoved as he remained collected throughout the event and indicated that he was not going to abandon his work.

“Of course I have won some money, but that is no reason for me to leave my current source of income. The people I work for have money in their accounts, but they still go to work.

“I have not made a proper plan as yet on how I’m going to spend my money, but one thing for certain is that I am going to buy or build a house. At present I don’t have a decent place of my own, but it has always been my wish to have one.”

Mr Office said he only used US$1 to hit the jackpot. “If you contact me next week, I will give you a breakdown of how I intend to spend the money.”

He also hinted on the possibility of buying a motorbike, a move he felt would fulfil his childhood dream of owning such an asset. The charismatic punter did not disclose his current salary, only saying it was the same as that his counterparts were earning per month.

“Since 2005 I had never managed to predict even three correct numbers, but I just had a feeling that I was one day going to be smiling all the way to the bank.”

Commenting on how he chose the six winning numbers, Mr Office had this to say:

“All the six numbers I chose have some relevance in my life. For instance, I chose number 32 because that is my postal address. Over the years, I have devised different methods of selecting numbers.”

Originally from Malawi, Mr Office, who said he was in his 60s, came to Zimbabwe some time before independence. He currently stays with his wife, while his two children are in Malawi. When not at work, he likes to hang out with his friends, mainly in Mbare.

There have been four jackpot winners in the last 12 months. The next jackpot is estimated at US$105 000.