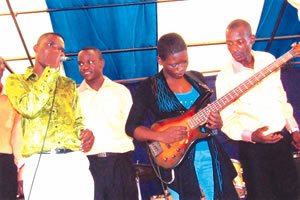 DENDERA music has given birth to its first female musician in the form of Miriam Chimbetu, the last born of the late Naison’s children. Miriam (16) is the latest find in the Chimbetu family and has defied the gender stereotype by playing the bass guitar with finesse, a feat that has charmed music audiences at some of  the shows held by her brother, Tryson.

The Form 4 student at Glen View High 1 School in Harare thrilled fans at Mega I Bar in the capital recently, where she strummed the bass guitar with aplomb. Even legendary sungura musician, Alick Macheso — himself a polished bass guitarist —  could not help but marvel at her burgeoning skills on both the guitar and vocals.

I’m ready to assist up and coming artistes: Chimbetu

But how did she end up playing the guitar?

“I started playing the guitar at the age of eight. My late father (Naison) taught me how to play all types of guitars. He wanted me to follow in his footsteps and become the first female in the Chimbetu family to become a musician,” Miriam said.

She added: “He always urged me to persevere, saying life was unpredictable and therefore I had to have a skill on which to fall back on.”

Miriam was, however, devastated when her father passed away in 2006.

“Although my father’s death affected me, my brother Tryson took over from where he (Naison) had left by further honing my musical skills. He is still teaching me, and now I am specialising on the bass guitar which is my favourite. I find it easy to play the bass guitar which I have played at five of Tryson’s shows,” Miriam said with a smile.

She was, however, quick to add that she only plays during family shows because she avoids night shows where some of the revellers are normally rowdy and violent.

“I only attend and play during family shows because at night some of the people are violent and this affects me a lot,” she explained. But is she into music full time, considering that she is still at school?

“I am not a full-time member of Marxist Brothers, I just go there to learn how it is done on stage.

“Whenever I attend a show and perform together with my brother, I won’t be doing it for money but for exposure. To me, it is a learning process and Tryson’s bass guitarist, Christopher, is always there, encouraging me and giving me a few tips,” she said.

Miriam believes that one has to pursue his or her education first before thinking of taking up music seriously.

“I believe education should come first before anything else. I want to be an accountant before I venture into music seriously. I want to record gospel music,” said the young artiste, who is a member of the praise and worship team at House of God Ministries church.

She is also the leader of the music club at her school. Miriam said the sky is the limit for young girls like herself.

“Pursue your dreams and never be discouraged.  I also pay tribute to Tryson for always leading by example,” she said.

Miriam was born on February 16, 1996, in a family five — Elizabeth, Blessy, Tryson, Wilson and herself. The Herald

I’m ready to assist up and coming artistes: Chimbetu