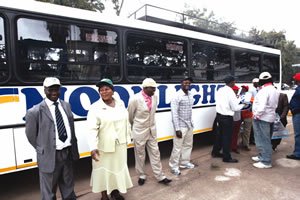 HARARE giants Dynamos have become the latest Zimbabwean outfit to be dealt a Champions League blow by Caf following revelations that the continental body has suspended experienced defender Guthrie Zhokinyi for four matches.

Dynamos are expected to fly out to Maputo via South Africa this morning for a first round, first leg clash against Mozambican champions Liga Muculmana on Saturday. But defence stalwart Zhokinyi will certainly not be part of the Glamour Boys’ delegation.

Caf sent a circular to Zifa outlining the names of the players who committed offences in the 2011 Champions League and had their suspensions carried forward into 2012. And Zhokinyi features on that list together with former Dynamos midfielder Archieford Gutu.

It is the second time inside a week that Zimbabwe’s representatives in the Champions League have received bad news from the Caf headquarters in Cairo, Egypt. On Monday, Caf stuck to their guns and insisted that FC Platinum had to find an alternative venue, which is not Mandava for the miners’ first round, first leg tie against Sudanese giants El Merreikh.

The FC Platinum against Merreikh encounter had to be grudgingly moved to Rufaro after Caf turned on a deaf ear to spirited Zifa appeals to have the game remain in Zvishavane.

Barely had the anger among local fans died on the diabolical decision to bar FC Platinum from playing at Mandava when DeMbare became the latest recipients of bad news from Caf following the announcement of Zhoki-nyi’s suspension.

What worsened the Dynamos plight is that Zhokinyi’s suspension is not just for one game as the tough-tackling centre back has been banned for four matches following his expulsion in a 2011 Champions League first round, second leg encounter against MC Alger in Algeria.

Dynamos, carrying what had appeared a healthy 4-1 first leg, lead bowed out of the competition after falling 3-0 in Algeria in controversial circumstances in which they finished with nine men following Gutu and Zhokinyi’s expulsions.

Zhokinyi was adjudged to have fouled an MC Alger forward and conceded a 73rd minute penalty with the offence also earning him a straight red card while the Algerians converted the spot kick for their second goal on the night.

With Gutu having been sent off earlier on, nine-man Dynamos, who now led 4-3 on aggregate, could not hold on for the remainder of the game and the Algerians duly scored the third goal they were looking for which sent them through to the second round on the away goals’ rule.

While Gutu has since moved on to the European stage where he is now playing in Sweden and will not be affected by the suspensions, the Caf sanctions have returned to haunt Zhokinyi.

The four-match ban effectively means that the Warriors defender will have to hope that Dynamos qualify for the group stage if he is to taste Champions League football this year. Ironically, Zhokinyi is one of the seasoned players that Dynamos had been banking on to ensure a tight defence in their bid for a place in the money-spinning phase of the Champions League.

Dynamos coach Callisto Pasuwa acknowledged as much and expressed shock at the news that Zhokinyi had been slapped with a lengthy suspension revealing that the defender had been a key figure in his strategy for Saturday’s showdown with Liga Muculmana in Maputo.

Pasuwa, who later named his final 18-man side for the trip to Maputo, said he had been forced to juggle around with his options in the heart of the Dynamos defence following Zho-kinyi’s suspension. The coach also described the ban as “a huge blow’’ given the Zhokinyi is a tough defender who has also gained experience in continental football over the years.

“When he came on in the game against Motor Action Guthrie stabilised the defence. He is a player who has aerial strength and really commands the defence very well.

“So to hear at the last minute that he is suspended, it’s really a big blow and I will now have to juggle with the other options that are available because you also need some height in matches of this nature. All along I had been planning with Guthrie in mind and I am surprised no-one at the club told me about the suspension, we could have easily travelled with him and only discover that while already in Maputo.

But we just have to soldier on and I am sure by the time we play on Saturday, I would have come up with new options,’’ Pasuwa said.

Pasuwa will also be hoping that skipper Magariro, who struggled with his game against the Mighty Bulls, will quickly find his form again and marshal the defence.

Although he may be short on international experience, youthful defender Partson Jaure has been a revelation if his showing in DeMbare’s pre-season games are anything to go by. And Pasuwa may have to take a gamble and throw into the deep end the talented defender who spent last season on loan to Northern Region Division One outfit La Liga.

Pasuwa can also still count on David Kutyauripo, Murape Murape, Leo Kurauzvione and newboy Takesure Chinyama for experience when Dynamos face the Mozambican champions. Chinyama, who had a largely successful stint at Legia Warsaw in Poland, will be trusted to the lead of attack together with 2011 Premiership Golden Boot award winner Rodreck Mutuma. Pasuwa must also have been happy to see his first choice striking partnership grab a goal each in the Charity Shield triumph over Motor Action.

The former Dynamos and Zimbabwe midfielder will be hoping that the duo find their range again in Maputo. The Dynamos coach will also be hoping that the midfield pair of Denver Mukamba and Tawanda Muparati will come to the party in Maputo as their creativity will be crucial in helping the Harare giants secure the result they need against Liga Muculmana.