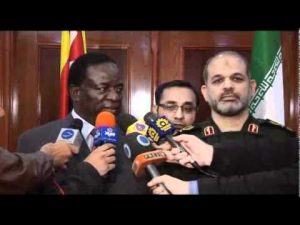 Iran has guns and expertise. Zimbabwe has uranium and diamonds. Both are international pariahs. It’s a heaven-made match in a world of crushing international sanctions.

Both countries are subject to crushing Western-backed sanctions. Both are revolutionary governments condemned for their human rights records, and isolated from world politics. Small surprise, then, that Iran and Zimbabwe have a lot in common and recently announced a defense agreement.

It is not clear how the cash-strapped but uranium and diamond rich Zimbabwe would pay for this service, but Minister Mnangagwa told reporters the agreement was merely a “consolidating and deepening” of the Iran-Zimbabwe relationship.

“We will help strengthen their military so that they are able to protect their land and culture, especially so they are prepared against the pressures and threats from Western countries.”

Circumstances have led to these two nations’ friendship. Iran is currently under substantial pressure over its nuclear energy program, which many Western governments believe includes nuclear weapons ambitions.

Iran denies this. Zimbabwe, for its part, is under heavy sanctions for its forced land-reform policies since 2000, in which large white-owned commercial farms were taken by force and without compensation.

Zimbabwe’s steady impoverishment have forced millions of its citizens to flee to neighbor countries like South Africa, but Zimbabwe’s rich mineral deposits, including uranium and diamonds have attracted the attention of Iran, which is increasingly cut off from the global economy.

The question now is how Iran intends to keep its promises. China – Zimbabwe’s largest military supplier – attempted to ship weapons to landlocked Zimbabwe in 2008, in the midst of a violent presidential election crisis, through the South African port of Durban, but South Africa turned the Chinese-owned cargo ship away.

Iran may face similar difficulties, and with its own government strapped for cash under European Union sanctions, it may not have China’s financial resources to find alternate routes to deliver military aid.

Political analysts in Zimbabwe believe the strengthening military relations between Iran and Zimbabwe are a result of Zimbabwe’s discovery of diamonds and uranium, which the Asian country wants to exploit.

Discovered in 2006, Zimbabwe’s Marange and Chiadzwa diamond fields near the eastern town of Mutare have been valued at $70 billion, with the potential of generating $2.6 billion per year in revenues for the Zimbabwe government. Zimbabwe’s uranium stocks at Kanyemba, north of Harare, are estimated to be 455,000 tons.

Major companies that have been given the rights to mine at Chiadzwa Diamond fields are the Chinese firm Anjin, which is partnering with the army, Mbada Diamonds, and Marange Resources.

Anjin’s company secretary is listed as being Charles Tarumbwa, a brigadier in the Zimbabwe Defense Forces. Mbada Diamonds’ chairman is Robert Mhlanga, a former air vice-marshal in the Zimbabwean air force.

“Zimbabwe has rich uranium reserves, but is faced with shortage of funds and does not possess the technical knowledge and equipment needed for extracting [them]…. Any country has the right to use peaceful nuclear energy based on international rules.”

Political analysts dismissed the relationship between Iran and Zimbabwe as a “marriage of convenience.”

“What we are seeing here is a union between the so called renegade states,” says Harare-based rights activist Hopewell Gumbo. “They will always converge because both countries preach anti-Western mantra all the time.

“But when you analyze the relationship, you will find out that Zimbabwe — being the poorer of the two — will always pander to the whims of the older brother,” says Mr. Gumbo. “Iran stands to gain in the exploitation of diamonds and uranium.”

“Iran is running out of friends internationally because of its nuclear activities,” says Mr. Moyo. “But this is not the time for Zimbabwe to befriend Iran. I smell a big rat because this relationship only blossomed after Zimbabwe discovered diamonds.

“I think it is not strategic at this point in time to have anything to do with Iran. We are bringing problems to our doorsteps,” said Moyo. Christian Science Monitor

The Monitor’s correspondent in Harare cannot be named for security reasons.