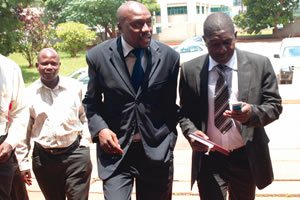 ST MARY’S legislator Marvellous Khumalo yesterday appeared in court for allegedly diverting the Constituency Development Fund to his personal use. The MP is reported to have bought himself a lorry before pocketing part of the money.

Khumalo (36) was not formally charged when he appeared before Harare magistrate Ms Anita Tshuma who remanded him out of custody to March 7 on US$300 bail. He was ordered to report once every week at the Anti-Corruption Commission. He is also required to surrender his passport and not to interfere with witnesses and investigations.

During the period extending from November 12 to December 30 2010, Treasury transferred US$50 000 in three batches into the account. On January 2 last year, Khumalo reportedly used the funds to buy a Bedford lorry registration number 538-649 M from United Tyre Services without the knowledge of both the constituency committee and the national management committee.

Investigations revealed that Khumalo was hiring out the truck for personal gain. On the other count of theft, the State alleges that between November 2010 and February last year, Khumalo made councillors to sign blank withdrawal slips and made various withdrawals amounting to US$5 000 from the constituency’s CDF account.

He converted the money to his personal use. The offence came to light following an audit by the Ministry of Constitutional and Parliamentary Affairs. After the discovery of the offence, Khumalo is said to have tendered a quotation from Madedale Enterprises (Pvt) Ltd, purporting that a payment of US$5 000 had been made for the sinking of a borehole in his constituency.

The said company disowned the transaction and investigations revealed that the borehole had been sunk by a non-governmental organisation called Germany Agro Action. It is further alleged that Khumalo withdrew US$20 705 on the pretext that it was for drain cleaning in six wards in the constituency.

Five councillors got their shares of US$3 000 apiece to use in their wards but Khumalo kept US$3 000 which was meant for Councillor Adam Puzo of Ward One who was absent on the day. He allegedly converted the money to his own use.

The audit established that Khumalo had fabricated cash payment vouchers with forged signatures, address and a false identity number, purporting Puzo had received the money. On another date, Khumalo, the State says, gave Councillor Darlington Nota US$3 000 for drain cleaning in his ward.

He then manufactured cash payment vouchers with forged signatures, address and a false identity number purporting that Nota had received US$3 850 yet in actual fact he had given him US$3 000. He pocketed the difference, it is alleged.

The Anti-Corruption Commission (ACC) is said to be on the hunt for MPs accused of abusing Constituency Development Fund (CDF) allocations with Khumalo becoming the first MP to be arrested.

The four MPs, according to the ACC, allegedly failed to submit returns to the government to prove how they had used the CDF allocations for development projects in their constituencies.

Although police could not comment yesterday, ACC officials confirmed the development, adding Khumalo was arrested for reportedly abusing CDF allocations meant for projects in his constituency. The officials said they were also hunting for Chanetsa, Ndambakuwa and Machacha. Chanetsa and Ndambakuwa could not be reached for comment at the time of going to press.

But Machacha said: “I was one of the first people who submitted returns to the ministry. I went to the shop where I bought my hardware and asked them for cash register receipts. They couldn’t produce them and they gave me duplicates.But the issue is the chief auditor Mudzungairi said my receipts were not tallying and would not accept the duplicates.”

Last week, Constitutional and Parliamentary Affairs minister Eric Matinenga told journalists that 10 MPs — six from Zanu PF and four from MDC-T — had failed to submit returns to prove that the $50 000 each got from the CDF in 2010 was used for developmental projects in their areas.

However, NewsDay is reliably informed that the ministers have since submitted returns to Matinenga’s ministry. MDC-T senior party officials yesterday confirmed Khumalo’s arrest, but party spokesperson Douglas Mwonzora professed ignorance on the matter.

Matinenga last week said: “Out of the 65 internal audits done, satisfactory responses have not been received from four constituencies — St Mary’s, Hurungwe North, Magunje and Kariba — and these matters have been handed over to the appropriate authorities for their information and, where appropriate, further investigation.”

Matinenga warned those who failed to account for the money would not be considered for the next allocation. Herald/NewsDay