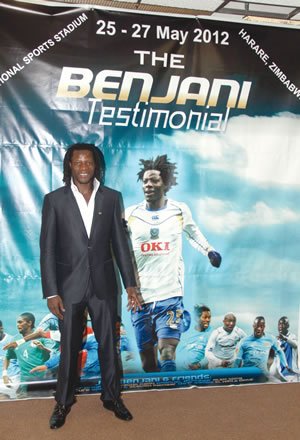 ZAMBIAN captain Chris Katongo is set to grace the National Sports Stadium in May, just three months after leading his country to a sensational Nations Cup triumph, to play in Benjani Mwaruwari’s testimonial.

The Chipolopolo skipper, who was named the best player at the 2012 Nations Cup finals, is among a galaxy of stars who have been invited by Benjani to play in his testimonial. Katongo, like Benjani, used South African side Jomo Cosmos as a springboard to European football.

Now playing his football in China, Katongo pushed all the African stars into the shade at the 2012 Nations Cup finals with an irresistible show as he led from the front to power Zambia to their maiden title.

Zambian legend Kalusha Bwalya, who has helped turn the Chipolopolo brand around since taking over as Football Association of Zambia president, is also set to grace the occasion.

Ghanaian midfielder Sulley Muntari, South African defender Bongani Khumalo, Nwankwo and Chris Kanu and Emmanuel Adebayor are some of the active stars who are set to feature in the testimonial.

Retired stars likely to fly into Harare for the occasion include Nigerian legend Austin “Jay Jay” Okocha, Daniel Amokachi, Rigobert Song and Zimbabwe’s own Bruce Grobbelaar. This galaxy of African football stars, both retired and active, are set to honour Benjani as he officially says goodbye to international football.

The Portsmouth striker’s last match for the Warriors was when he featured in the drawn 0-0 African Cup of Nations qualifier against Cape Verde in November 2010. But the former Manchester City striker, who is now in the twilight of his career, has decided to bid farewell to the Zimbabwean fans at home and has roped in a star-studded line-up for his testimonial match.

The game — set for the National Sports Stadium on May 26 — will be the highlight of the official launch of the Benjani Mwaruwari Foundation Trust, a charity organisation aimed at grooming football talent.

To kick-start the festival, a dinner dance is scheduled for a Harare hotel on May 25 and the major highlight will be the match featuring the Friends of Benjani against the Warriors at the National Sports Stadium. A team of former Zimbabwe greats will play in the curtain-raiser before the testimonial game.

The celebrations will culminate in the ground-breaking ceremony of a football academy in Bulawayo on a piece of land acquired by the former Warriors star. Yesterday, Mwaruwari officially began a journey towards his testimonial match when he unveiled to the media his grand plan.

The testimonial match is the first for Zimbabwe to attract such an array of stars and ends all speculation linking Mwaruwari to a possible dance with Warriors as a player. “I retired from international football in 2010 so this match is going to be a farewell to all my fans.

“All my friends know that I have retired from international football and they are willing to come and give me their support. So I cannot be seen to make an about turn and then play for the national team again. I believe I have had my time,” said Benjani. The Pompey forward is already planning for his life after hanging up his boots.

Benjani’s testimonial match has received the blessings of Zifa, who have also appointed the former Manchester City and Auxurre striker as their ambassador. The dreadlocked striker cut his teeth at Lulu Rovers in Chegutu before moving to Highlanders juniors and then UZ before playing for Air Zimbabwe Jets.

At the moment, Benjani has targeted 40 players he wants for the grand testimonial match while South Africa’s legend Jomo Sono could be part of the technical team. He said former Manchester United and England striker, Andy Cole, and former Leeds and South Africa defender, Lucas Radebe, could also grace the match.

Benjani said the match will be a tribute to all his fans who have supported him since he made his debut for the senior team in the Nelson Mandela Cup which the Warriors won 1-0 in South Africa.

“If it was possible, I wish I could invite everyone to play, from the people I was with at Lulu, then Highlanders, University of Zimbabwe, Air Zim Jets, Jomo Cosmos, Grasshoppers, Auxurre, Sunderland and in the Warriors,” said Benjani.

The Undertaker, said he does not rule out a chance to come back home and play for one local side, just like Peter Ndlovu, before he officially retires. “Given the chance, I could still come back and play here at home and if possible I may play for all the teams,” he said.

Tsaurai Muzanenhamo, who is one of the people working with Benjani to organise the testimonial match, said proceeds from the game will be channelled towards the school of football excellence. “The match will fall on the weekend of the Africa Day celebrations. Proceeds from the game should be used to set up the Benjani Mwaruwari Foundation, a charity trust that is going to set up a football academy.

Muzanenhamo said the testimonial match will be an opportunity to market Zimbabwe as a tourist destination. Once all the logistics have been put in place, Muzanenhamo said the game could be beamed live on ZBC while there are plans to try and have Superport’s coverage.

The Rainbow Tourism Group and NetOne have already been roped in as partners while other sponsors will be named in due course.