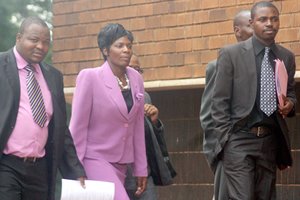 CHITUNGWIZA housing director Jemina Gumbo yesterday appeared in court charged with 46 counts of criminal abuse of office after she allegedly allocated commercial and residential stands without following laid down procedures.

Some of the allegations against her involve selling two properties, which were meant for a stadium and hotel to Prophet Makandiwa’s UFI Church, a stand to Watchtower Bible Society, four stands to Peyama Investments and Long Range Investments without advertising them.

Gumbo (33) was granted US$500 bail with the consent of the Attorney General’s Office. As part of her bail conditions she was ordered not to visit Chitungwiza town council head office and Seke South district office.

Mawere wants ZACC to investigate how SMM has been collecting…

She was also ordered to surrender her passport, report once a week at Rhodesville Police Station and not to interfere with investigations and witnesses. Mr Everson Chatambudza is representing her.

Prosecutor Mr Oliver Marwa alleges that between 2008 and 2011, Gumbo allocated stands to individuals and organisations she favoured without publishing them in the local newspapers as required under section 152 of the Urban Councils Act Chapter 29:13.

It is alleged on December 23, 2008, she sold commercial stand number 19762 to Hwamanda Production. She also sold stand number 19743 to Silvia Simau on November 16 the same year. In 2009, she allocated 10 stands to different organisations including Peyama Investments, which benefited two stands on February 16 and March 25.

Gumbo, the State says, allocated two stands to UFI church on November 7, 2008 and another one on July 8, last year. Council had approved the construction of a stadium and hotel on the two stands. Long Range Investments also bought two stands, which were meant for a market and a playground.

Gumbo allocated the Watchtower Bible Society a stand, set aside for a shopping centre. She also allocated a recreational open space to Foldstalk Investments, which turned it into a shopping complex.

The State further said that according to the Regional, Town and Country Planning Act, the application for change of use of the stands was supposed to have been made by Chitungwiza Municipality, the owner of the land. Magistrate Ms Anita Tshuma presided over the matter.

With no single conviction, ZACC used US$33,3 million to fight corruption