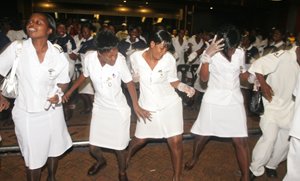 ZIMBABWE will soon start exporting its sought-after but redundant nurses to other countries following discussions to strike government-to-government agreements to facilitate the move. The country is unable to employ the nurses owing to a blanket freeze on new recruitment recently imposed by the Ministry of Finance.

Health and Child Welfare Deputy Minister Dr Douglas Mombeshora said last week that the Government was studying a concept paper on the modalities of implementing the system as a way of recouping training costs.

“We obviously cannot stop people from living the country to seek greener pastures, but I think as a country we have to find a way of doing it in an orderly manner that ensures that the country also benefits through exporting our nurses and doctors,” he said.

The system, said Dr Mombeshora, will be on a country-to-country arrangement where Government will get a once-off payment while the receiving country makes proper arrangements for the welfare of the exported staff. Dr Mombeshora said they would prefer short-term contracts running for three years.

He said Government could not keep the nurses in the country when it was unable to offer them employment. The first move towards the releasing of nurses was the suspension of the bonding system which entailed holding onto their certificates until they worked three years at a government institution.

Namibia is reported to be interested in engaging Zimbabwean pharmacists, while there are over 60 Zimbabwean doctors working in Lesotho. Hundreds of experienced local nurses migrated to work in regional countries and abroad since the turn of the millennium when the country experienced some economic problems.

Countries like Cuba get money from exporting health staff to other countries and there are a number of doctors working in Zimbabwe from the North American country.

Dr Mombeshora said there were a number of local doctors going outside the country without undergoing their housemanship. Such doctors, he said, would come back to work as junior doctors because they would be considered not to have completed the requirements to operate as doctors.

The Sadc protocol dealing with health requires that the generating country be consulted before staff are engaged. Dr Mombeshora said there were enquiries from doctors in the diaspora who wanted to return following an improvement in the country’s economy and operating environment.

He said the doctors would be able to juggle many assignments to improve their revenue streams which they could not do if working in other countries. The Herald