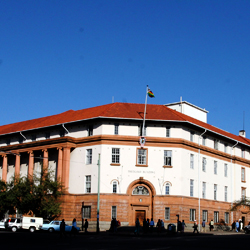 A BULAWAYO courtroom had to be cleared so that prison wardens could examine a man charged with rape after he claimed that his male member was so small there was no way he could have committed the crime.

Joel Ndebele (34) of Dingumuzi Township in Plumtree was accused of raping his ex-girlfriend in August last year soon after being released from prison. But he stunned a packed courtroom last week when he told Bulawayo regional magistrate, Owen Tagu that he could not have committed the crime because his manhood was shrinking and had become so short it was impossible to have penetrative intercourse.

Prosecutors said Ndebele, who had been in jail since December 2010, decided to visit his lover a day after being released on August 7. She however told him she had married somebody else and that their relationship could not continue. Ndebele then invited her to his homestead so they could discuss the issue and threatened to kill her and her husband when she refused.

The woman then reluctantly followed him to his house where she was detained over night. The court heard that Ndebele raped her twice before releasing her in the morning. The woman returned home but did not tell her husband about the attack or report the matter to the police.

However, on August 30 she allegedly saw Ndebele following her with an empty bottle and ran into a nearby house where one of the occupants happened to be a police officer and reported the rape.

But Ndebele shocked the packed courtroom when he said there was no way he could have raped her because his manhood had long been shrinking, leaving him ill-equipped to commit the alleged crime. The prison wardens who examined him told the magistrate that his male member was, indeed, small.

Prosecutor Jabulani Mhlanga then asked the court for time have Ndebele examined by medical experts. The magistrate allowed the request and remanded Ndebele in custody to February 23.