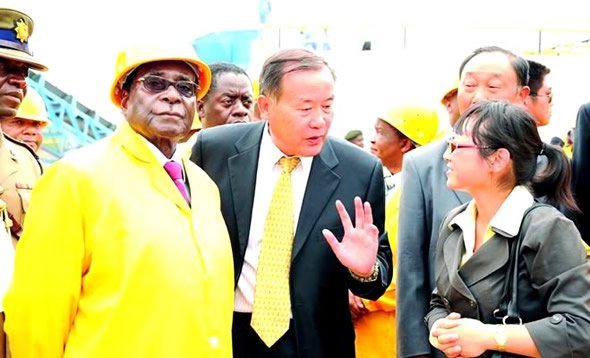 By Peta Thornycroft and Aislinn Laing in Johannesburg

A Zimbabwean diamond field said to be the largest in the world is being mined by companies staffed by Robert Mugabe’s police and military chiefs who may use the proceeds to crack down on opposition supporters, Global Witness has warned.

A study by Global Witness marks the first comprehensive attempt to pin down ownership of two companies awarded the rights to mine at Marange, in eastern Zimbabwe, since concessions were awarded by the mining ministry – run by Mr Mugabe’s Zanu-PF party – four years ago.

It reveals that one company has among its directors members of Mr Mugabe’s security services who have previously been implicated in vote-rigging and political violence in the run-up to elections.

The other is part-owned by companies registered in tax havens such as Hong Kong and the British Virgin Islands, making its beneficiaries virtually impossible to identify.

Tendai Biti, the finance minister and a member of the Movement for Democratic Change in Zimbabwe’s fractious coalition government, has repeatedly complained about the disappearance of diamond revenues which it was hoped might help to revive the shattered economy.

Global Witness claims that instead, the security forces could be channelling the profits into a “war chest” that could be used to act against dissenting voices in elections expected this year or next.

“Control by the military and police over a major diamond miner creates opportunities for off-budget funding of the security sector,” the report said. “There is a real risk of these revenues being used to finance violence during a future election.”

Military chiefs, many of whom fought under Robert Mugabe in the independence war, have already made clear that they will not allow an MDC victory.

Global Witness is appealing to the Southern African Development Community, charged with keeping the peace in Zimbabwe, to push for the cancellation of the mining contracts and greater transparency in future.

“Zimbabwe desperately needs these diamond revenues for health, education and the refinancing of its banks,” said Nick Donovan, the Global Witness researcher who compiled the report. “It does not need it to be spent on AK47s or the repression of its people.”

Mr Donovan said it was unlikely to be coincidence that so many senior military figures were on the board of one of the mining companies. “That number of officials suggests that the government is in control,” he said. “It looks like a Zanu-PF government decision to control one of these diamond mining firms as a war chest.”

Marange diamond fields are home to an estimated 25 per cent of the world’s diamonds. They first made international headlines in 2008 when they were seized by the Zimbabwean military, which used helicopter gunships to clear the area of illegal diggers when the extent of the subterranean bounty became clear.

Last year, Global Witness claimed that locals were being forced to work for soldiers, then smuggle the stones over the Mozambican border to sell. Their proceeds were then returned to the military, it alleged.

After widespread condemnation, the fields were divided up among favoured companies. Leading the pack were the Chinese, whose Exim bank provided the Zimbabweans with a $98 million loan to rebuild their defence college in return for a concession at Marange.

Anjin, a joint venture between a Chinese and a Zimbabwean company, intends to produce two million carats a month. According to Global Witness, as well as Chinese businessmen, Anjin has on its board the ministry of defence permanent secretary along with a Zanu-PF official, two police commissioners and two Zimbabwe defence force officers.

Anjin’s company secretary is listed as being Charles Tarumbwa. A brigadier, Charles Tarumbwa is on the EU sanctions list for what it describes as his role in “the terror campaign waged before and during elections”.

The second company, Mbada, is run by Robert Mhlanga, a former air vice-marshal in the Zimbabwean air force, who was at one time Mr Mugabe’s personal helicopter pilot and a prosecution witness in the 2003 treason trial of Morgan Tsvangirai, the MDC leader.

Mbada is associated with a network of companies based in Mauritius, Dubai, the British Virgin Islands and Hong Kong. “The secrecy surrounding the real owners of Mbada has the potential opportunity for officials or military figures to personally benefit from a state asset,” the Global Witness report said.

Mr Biti said the results of the study did not surprise him. “I know the money [from the sale of Marange diamonds] is being stolen, but I don’t have any proof of how it is being stolen,” he said. Neither Anjin nor Mbada could be reached for comment. The Telegraph