Stealing from the dead backfires for cop 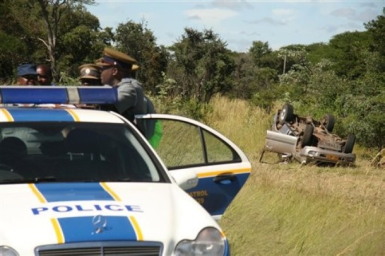 A GOKWE police constable was on Monday sentenced to 320 hours of community service for stealing US$3 000 from a corpse at an accident scene.

Constable Slindeni Mathew pleaded guilty to the offence while his co-accused Constable Bryon Kahove, who appeared in court separately, denied the charge. He was remanded to February 28 on US$20 bail.

Gokwe magistrate Mr Christopher Mberewere said Mathew will perform the community service at Muchakata Primary School. The case against the two was that on December 23 last year, Mathew and Kahove arrived at an accident scene at the 117km peg along the Kwekwe-Gokwe Road.

Mathew, it is alleged, found out that a Toyota Noah that was heading towards Gokwe had just overturned and killed one passenger, Mr Job Mautsi, on the spot. Seven other passengers in the car, which was being driven by Liberty Sibanda, were seriously injured.

The court heard that Mathew and his colleague searched Mr Mautsi and found US$3 250 cash in his pockets. Mathew and Slindeni shared US$3 000 equally and surrendered only US$250 to Gokwe Traffic Officer in Charge, Inspector Jumbe, who had arrived at the accident scene later.

The court heard that one of the deceased’s relatives, Mr Jaya Mautsi later visited Gokwe Police Station. He then reported that Job Mautsi had US$3 250 cash with him when he was involved in the fatal accident and intended to collect it. Investigations led to the arrest of the two police officers.