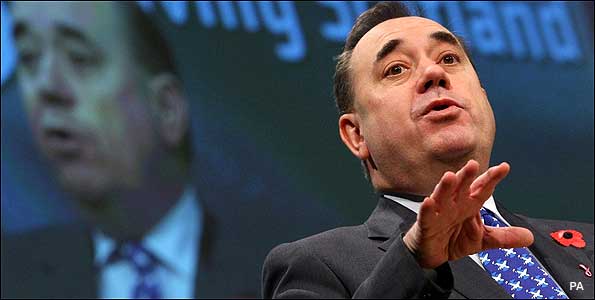 Mr Paxman was interviewing the First Minister prior to yesterday’s referendum consultation launch when he made the remark.

He said comments that Mr Salmond had made about an independent Scotland being a “beacon of progressiveness” were similar to remarks by Mr Mugabe. Mr Salmond told Mr Paxman he would not be doing himself “any great favours” by comparing Scotland to Zimbabwe.

Mr Paxman replied: “No, I’m comparing you to Mugabe”.

The exchange prompted a storm of protest on the internet with many people taking to Twitter to vent their fury. Viewer Colin Macaulay said: “Jeremy Paxman, to my utter horror, has just compared Alex Salmond to Robert Mugabe.”

A BBC spokesman said: “This was a good natured exchange between two experienced political operators who often spar with one another. Jeremy’s reference was made within this context.

“While the comparison was not serious, he was attempting to tease out details of an independent Scotland and how politically progressive it could be.” Scotsman.com