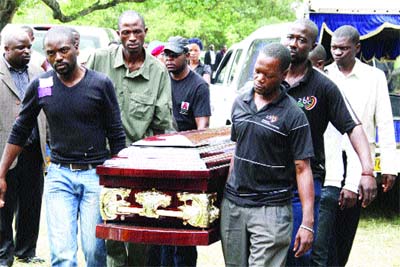 HARARE- Freedom Moyo a journalist with the Zimbabwe Broadcasting Corporation (ZBC) might have died from injuries sustained in a serious car crash because medical personnel who attended to him struggled to secure emergency supplementary blood in the wake of his excessive bleeding.

The 38 year old ZBC Current Affairs Manager was alone when his vehicle rammed into a stationery haulage truck that had broken down along Bishop Gaul Avenue in Harare around 1am. The truck was said to have run out of diesel.

Moyo was admitted at the West End clinic with a suspected broken leg and ruptured intestines. He had an emergency operation on Saturday. Friends and relatives believe had he received adequate blood supplies he stood a better chance of surviving.

On Tuesday the National Blood Services (NBS) together with MISA-Zimbabwe, Zimbabwe Union of Journalists (ZUJ) and Friends of Moyo announced that they will on Saturday, 28 January 2012 launch a campaign to encourage members of the public to donate blood.

The event will take place at the NBS offices next to Parirenyatwa Group of Hospitals along Mazowe Street in Harare at 1030hrs. The NBS will provide transport to members of the public interested in supporting this worthy cause. Transport will be available from Town House to the NBS offices as from 10am.

A similar event will take place on the same day in Bulawayo at the NBS/ United Bulawayo Hospitals (UBH) at 10am.

UK based Afro TV to launch in March