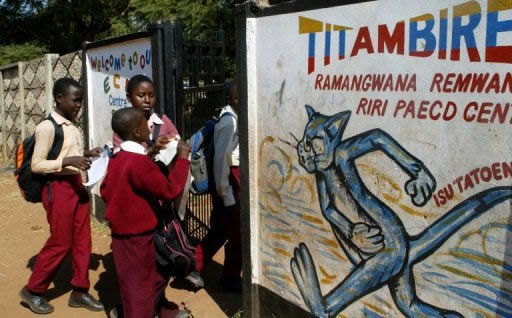 HARARE- More teachers on Tuesday joined a national strike in which government workers are seeking to double their salaries. Their action on the strike’s second day, and the absence of more staff from government offices, began to disrupt routine services.

Main schools in Harare sent pupils home early Tuesday as teachers heeded the call by labor leaders. They are demanding the lowest monthly salaries of $250 are raised to $538 to meet the minimum needs of an average family of five.

Prime Minister’s Morgan Tsvangirai’s party, in charge of the labor and finance ministries in the nation’s shaky coalition, said in a statement Tuesday it cannot meet the demands of 235,000 government employees without increased revenue from diamond mining controlled by President Robert Mugabe’s party.

The former opposition Movement for Democratic Change of Tsvangirai, a former labor leader, said it wanted to pay “a living wage” to ensure government facilities and departments provided viable services.

“It is possible to raise the funds if diamond revenues are remitted to the treasury” controlled by Finance Minister Tendai Biti, it said.

In his 2011 year-end budget statement, Biti said mining groups in the controversy-mired diamond fields of eastern Zimbabwe pledged to pay $600 million into state coffers this year. But possible profits from diamonds were far higher, he said.

Tsvangirai’s party said Tuesday Mugabe’s ZANU-PF party “continues to hold back on those national resources that should benefit all Zimbabweans.”

Mugabe’s party has denied hoarding revenues from diamonds. Human rights groups accuse the party and military chiefs of involvement in illicit diamond trade and rights violations and killings in eastern Zimbabwe, the recently discovered site of one of the world’s largest alluvial diamond deposits.

The Apex Council, the umbrella body of public service labor groups, said in a statement the momentum of the five-day strike was building and its leaders were picketing schools and government offices where there were “pockets of resistance.”

“The strike will demonstrate the seriousness and resolve workers can take on bread and butter issues,” it said.

The militant Progressive Teachers Union, the second largest teachers’ organization, said it had lost faith in the coalition that had failed to act against “workers who subsist on corruption.” They were against the strike and kept some services running. In a statement Tuesday, it said politicians were using the teachers’ plight for “sheer grandstanding” to score political points.

“No political party has been sympathetic to government employees … at one time we were made to believe that the selling of diamonds shall neatly dress our wretched lives,” the statement said. Associated Press