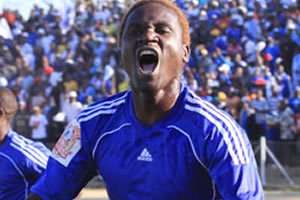 CAPE TOWN- Roderick Mutuma has failed to make the grade at South African Premiership side, Ajax Cape Town, and yesterday sent a message to his Dynamos fans – The Prince is Back!

Mutuma flew back home on Wednesday night and everything now points to the Premiership’s Golden Boot winner spending another season at DeMbare. There were concerns from a number of observers that Mutuma, who only played in the domestic Premiership last season, was still too raw to make a move to a foreign club.

And, it appears, their fears have been confirmed with the ginger-haired forward’s failure to land a contract at Ajax Cape Town. The striker, though, is set for another trial stint at Kaizer Chiefs next week.

The lanky forward, who trained with his teammates at Raylton Sports Club yesterday morning, revealed that he had not made a breakthrough at Ajax Cape Town. Mutuma, however, said he was happy to be back home and was looking forward to another successful season with DeMbare.

“Football is the same everywhere,” he said. “I had a good period with Ajax but it seems they were much concerned with the physical stature and I think I should work more on that.  So I am back at Dynamos, the Prince is back.”

His return could be a blessing for coach Callisto Pasuwa who registered him in his 26-member squad for the Caf Champions League. DeMbare lost another striker from that list – Cuthbert Malajila – who moved to Maritzburg United this week. They feared for the worst with the uncertainty hovering over Mutuma and Takesure Chinyama’s impending trials in Egypt.

Dynamos are yet to tie up a deal with Chinyama although the bustling forward has committed himself to joining the club on a short-term deal. Therefore, the return of Mutuma was a big relief to the Glamour Boys. His two-year contract with DeMbare expires at the end of the year and the lanky forward revealed that he has set his sights on doing well at the club this season.

He revealed that he was still weighing his options after Kaizer Chiefs came into the picture wanting to have a look at him.

“I will remain at Dynamos if nothing materialises at Chiefs next week.

“My manager is arranging the trials and I will not go for any other trial afterwards.  It’s an opportunity that has arisen and I am taking the initiative. My manager has also said I should play in the domestic season at least for another season before considering a move abroad.

“I am eager to take part in the Champions League again this year and my hope is to do better than we did the last time when most of us were still immature.  In fact my dream this year is to get to the final (of the Champions League). I want to achieve more with Dynamos because the club brought me to the spotlight.

“I want more goals this season and with people like Denver Mukamba in top form I am confident we can do it. I have confidence in the team.  The coach has stressed that we need to go up a gear and from the training you could see that everyone is pulling up their socks.”

Mutuma believes he still needs guidance and would want to improve his game at DeMbare. He joined the club last season from Division One and rose to become the top striker with 14 goals but he feels he still needs to grow in the game.

“Discipline counts a lot in football and I think I have addressed that area.  I learnt a lot of things in my first season in the Premiership and maturity-wise I think most of us have developed. I am working on my fitness because for one to be able to play at the highest level you must always be up for the challenge.

“As the defending champions we need to lift our game because we are the team to beat.  Everyone wants to beat the champions.” DeMbare will continue with their preparations this morning with a practise match against Black Rhinos at Rufaro.

Pasuwa said they will play two games and will field all his players for assessment. “We have a good squad and I think everyone deserves a chance. I am yet to get a full assessment but I believe we have the players.”

DeMbare are also arranging a friendly game with newly promoted side Quelaton at Ascot on Sunday and will also engage Hwange in the semi-finals of the Bob ‘88 Cup next week.

Zimbabwe has 29 vacant seats in Parliament