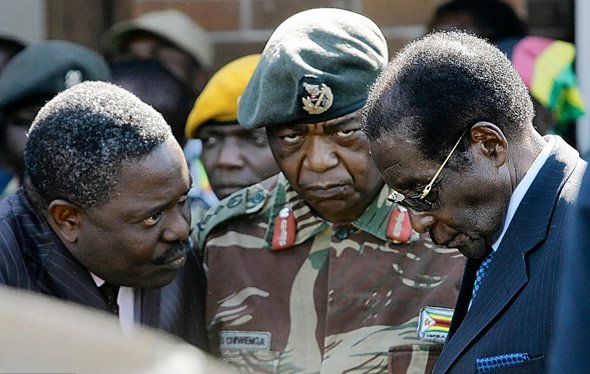 HARARE- An Executive Commission to run the Central Intelligence Organisation (CIO) is on the cards as part of efforts by the coalition government to make the dreaded and secretive body accountable for its actions.

But Constitutional Select Committee (Copac) co-chairman Munyaradzi Paul Mangwana (pictured) dismissed the proposal as wishful thinking on the part of the two MDC formations, arguing that there was no such commission “under the sun” to run intelligence services.

Currently, the CIO is under the Office of the President but the organisation is accused of being partisan and grossly violating human rights with impunity. Copac co-chairperson Douglas Mwonzora said the Copac adopted a principle agreeing that security organs including the CIO must uphold the constitution and observe human rights in their work.

“We think this is not undue interference with their work,” he said. “This is why we are insisting on the establishment of an executive intelligence commission which will ensure that operatives who abuse human rights are brought to book.”

Mwonzora said the commission, similar to the one for Defence and Police forces and Prison Services, does not necessarily have to be independent but have executive powers. MDC-T secretary-general Tendai Biti who is also a Global Political Agreement (GPA) negotiator insisted that such a CIO services commission is possible and should be answerable to Parliament and not the executive.

He said executive commissions used to be under a neutral person, Canaan Banana who was a ceremonial president from 1980 to 1987, but the bodies have become politicised under the system of an executive President.

Biti said even cabinet ministers perceived to be powerful such as Defence Minister Emerson Mnangagwa had no legal control over the likes of Zimbabwe Defence Force Commander General Constantine Chiwenga, who report directly to President Mugabe.

Zanu PF has resisted reforming the security sector, the only pillar that has kept Mugabe, who has ruled the country for the past three decades, in power. The party’s national chairman Simon Khaya Moyo recently said security sector reforms were irrelevant and were not part of the Global Political Agreement.

However, Mangwana said there was no agreement on the establishment of an intelligence commission as the two MDC formations have failed to provide examples of where such bodies exist elsewhere in the world.

“The trend is that Intelligence is always under the Presidency just like the American CIA and British MI5,” he said. “Intelligence has to do with the security of the nation. If you establish such a commission, you weaken the security and sovereignty of the state.”

Mangwana’s argument however is flawed.

In both the US and UK, the spy agencies like other security apparatus report to various policy making bodies such as the UK House of Commons and the US Congress. In Zimbabwe other security agencies like the army, the police and prisons are a creation of the constitution and they have respective Acts of Parliament to guide their operations. The CIO has none and is a law unto itself. Zimbabwe Standard/Nehanda Radio.com

How can a ballpoint pen fight with a gun?