Not so bright General Chiwenga graduates 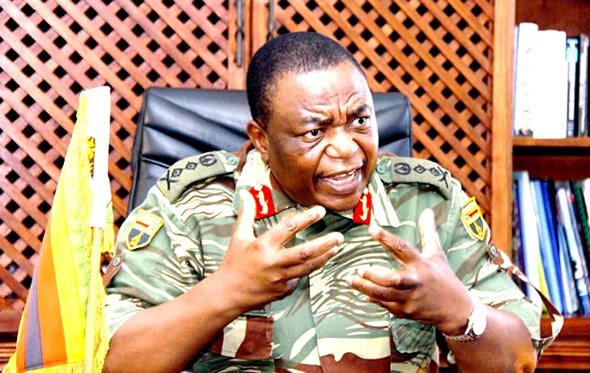 Commander of the Zimbabwe Defence Forces General Constantine Chiwenga has acquired a Masters degree in International Relations in what is being seen as a move to bolster his presidential bid.

Chiwenga, described by his subordinates as “knowing very little” about the military, has gone public with his achievement, taking out an ad in the Sunday Mail. He obtained the degree from the University of Zimbabwe.

“The Zimbabwe Defence Forces officers, men and women would like to congratulate the commander of the ZDF General Constantine Guveya Chiwenga on the attainment of a Masters degree in International Relations and winning the book prize,” says the ad, ostensibly inserted by well wishers.

“A good leader always leads by example. No doubt you are a man of honour, integrity, diligence and intelligence.”

The flattering ad flies in the face of a damning appraisal contained in the Wikileaks cables by Brigadier General Herbert Chingono, the Inspector General for the Zimbabwe National Army, and Major General Fidelis Satuku, the ZDF Director General for Policy and Personnel, who in a January 5 and 6, 2010 meeting with US ambassador Charles Ray, spoke disrespectfully about their commander as an ignoramus.

“General Constantine Chiwenga is a political general who works hard, but who has very little practical military experience or expertise. Given a choice between a military and a political issue, Chiwenga will always choose the political, because he doesn’t know enough about the military to be comfortable discussing it,” the cable reads.

Confirming a story we first broke that General Chiwenga was harbouring political ambitions, Chingono says: “He (Chiwenga) will be very disappointed if he does not get a political position when his tenure as Defence Chief ends.”

Chiwenga’s term of office expires in Febraury 2012, and there is good chance it will not be extended.

Prime Minister Morgan Tsvangirai said he must retire. The military officials told the ambassador that Chiwenga was implicated in the 2008 violence. Chiwenga, who enjoys the support of most of the army’s top brass, has not hidden his presidential ambitions.

“He is saying, ‘I am educated now and I can run the country’, that was the object of that ad,” said a senior Zanu (PF) official. “He is ambitious and power-hungry, but certainly not presidential material.” The Zimbabwean

‘Coup soldiers’ are hungry, eating ‘sadza and beans without cooking…