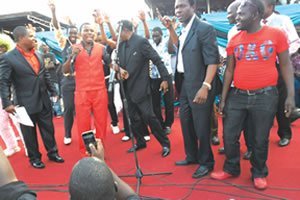 Peter Moyo, son of the late sungura musician Tongai, will this week resume shows after the Moyo family eventually resolved differences that had been threatening to tear Utakataka Express apart.

Although Peter initially had been scheduled to play at Zimplats and Mutangaz respectively soon after his father’s memorial service, the shows had to be cancelled after squabbles emerged on who was supposed to take over from Tongai.

But this is now water under the bridge since it has become apparent that Peter is the “ordained” Utakataka frontman, who is supposed to steer the ship off from the coast, where it had been docked for weeks. Following his Gweru show this weekend, Peter is set to rock Harare fans, when he holds his first show in the capital on November 11 at the Sports Diner International.

The show has been dubbed the Quad 11, because it will be happening on the 11th of November – which is the 11th month of the year, in the 11th year of the new millennium (2011) and he will go on stage at 11pm. Sports Diner International manager said the show is meant to allow Peter to connect with his late father’s fans, who had been supporting Utakataka Express.

“We want the brand to continue and we hope that Dhewa’s fans would be able to rally behind the young man,” said the manager. Peter is expected to play his father’s hit songs like “Muchina Muhombe”, “Hurungudo”, “Ndazvimba Mapapu” as well as songs taken of Tongai’s last album “Toita Basa”.

With the gifted chanter Shiga Shiga in tow, Peter will without doubt have a sidekick and a lieutenant who will surely guide him throughout the show. The 22-year-old, who made his first appearance as a stand in for his late father, at a show in Botswana, is proving to be of character. With composure the youthful “Igwe” oozes with charm just as his father did.

In the short period he has been with the band (Utakataka Express) Peter has been hailed for the energy and determination that he brings out on stage. Last weekend, he put out a splendid performance at the launch of a documentary chronicling Dhewa’s battle against cancer – “The Show Goes On”.

Whether he will live up to of his father’s standards is still yet to be seen but given the short time he has had to fit into Tongai’s shoes, the young Dhewa is poised to scale heights.