Warriors striker Knowledge Musona’s little brother, Walter Musona, is training with Chelsea FC in London. The young lad is part of the 15 players of the Copa Coca Cola Under 16 Dream Team which was selected last year and honoured with a training stint with the big-monied club, home to Didier Drogba and Michael Essien among a host of African footballers. 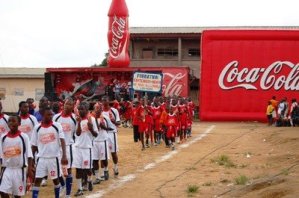 Coca Cola are official sponsors to Chelsea Football Club and have recently run the Copa Coca Cola. The 15 boys are also joined by at least 108 players from nine different countries who are at the Club for a series of once in a lifetime activities at Chelsea. The players are training with coaches at Chelsea FC’s state of the art Cobham training facility where the players will compete in a tournament before attending a Copa Coca Cola Dinner at Stamford Bridge.

The players and tournament winners will be presented with their trophies and Chelsea FC gifts by some of the first team squad players. Whilst in the UK, the guests will also get to experience the vibrant and heritage-rich city of London, taking in numerous sights, including Buckingham Palace, the London Eye and Big Ben. There is also a number of exciting leisure activities planned, including a trip to Thorpe Park, Britain’s leading amusement park.

The group also attended a Chelsea game on 24 September as “special guests” who were taken on a ‘behind the scenes’ stadium tour. The group will depart London on October 3 2011 to return to their respective countries.

Musona finds his radar in Belgium

SA based singer claims Winky D an ‘agent of Satan’

Musona finds his radar in Belgium