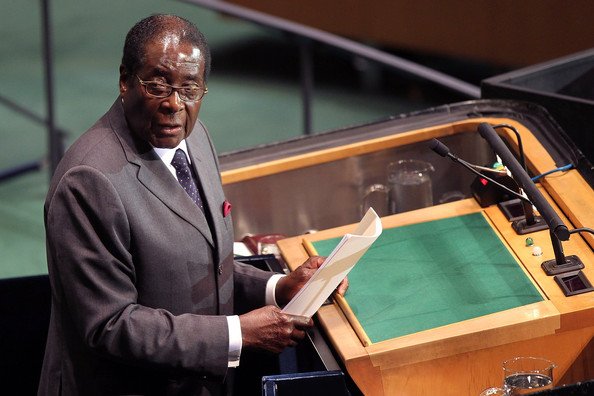 Full text of a speech by Zimbabwean Dictator President Robert Gabriel Mugabe on the occasion of the General Debate of the 66th session of the United Nations General Assembly, delivered in New York on September 22, 2011:

Your Excellencies, Heads of State and Government,

Russia warns US of ‘consequences’ of Ukraine…

I would like to take this opportunity to congratulate you on your election as President of the 66th Sessionof the General Assembly. My delegation is confident that under your able leadership, the GeneralAssembly will successfully address the pressing issues on the agenda of the current Session. I also wishto pay tribute to your predecessor, Mr Joseph Deiss, for successfully steering the proceedings of this August house during the 65th Session.

I wish to congratulate the Secretary General, Mr Ban Ki-moon, on his re-election for a second term. TheSecretary General, we remain hopeful, will strive to shepherd the United Nations in an open, transparentand inclusive multilateral approach.

Such an approach, I believe, would renew and revive the hopes andexpectations of developing countries in the efficacy of the world body. Zimbabwe reposes her hopes in aUnited Nations that recognises the equality of sovereign states as enshrined in the founding Charter.

I want to express my heartfelt congratulations to the Republic of South Sudan on its attainment of independence and its subsequent admission as the 193rd member of the United Nations family. As we all congratulate this new nation, Zimbabwe calls upon the international community to render all the necessary support to its government and people in tackling the numerous development challenges that lie ahead. Zimbabwe stands ready to make its modest contribution to that end.

The theme, “The role of mediation in the settlement of disputes,” is most apt. But, how do we, the U.N. members, measure in relation to it in our activities here at the United Nations and out there in the real world?

It is my principled view that we must be duty and honour bound to operationalise the principles upon which the Charter of the United Nations is based. We must not be guilty of manipulating the Charter to serve our particular or sectional designs and ambitions. The Charter is our set of commandments that must be strictly obeyed by each and every member if international and regional peace is to be maintained.

We cannot honestly say this is the position today in regard to NATO states versus Libya. Whatever political disturbances might have first occurred in Bengazi, the process of mediation and peaceful negotiations was never given full play.

It was deliberately and blatantly excluded from shedding positive influence over developments. There was quick resort to invoking Chapter VII of the Charter with gross deliberate misinterpretation of the scope of the mandate originally given NATO to oversee and protect civilians.

Bilateral hatreds and quarrels or ulterior motives must not be allowed to creep into considerations of matters pertaining to threats to international peace and security, or to the principle of the Responsibility to Protect.

We are yet to be convinced that the involvement of the mighty powers in Libya’s affairs has not hindered the advent of the process of peace, democracy and prosperity in that sister African country.

Our African Union would never have presumed to impose a leadership on the fraternal people of Libya as NATO countries have illegally sought to do. At the very least, the African Union would have wished to join those principled members of this august body who preferred an immediate ceasefire and peaceful dialogue in Libya.

The African Union was and remains fully seized with this crisis and will spare no energies in fully complementing the U.N. so that peace returns to Libya and its tormented people. We wish that process God’s speed.

The newly minted principle of the Responsibility to Protect (R2P) should not be twisted to provide cover for its pre-meditated abuse in violating the sacred international principle of non-interference in the domestic affairs of states because to do so amounts to an act of aggression and destabilisation of a sovereign state. Moreover, to selectively and arbitrarily apply that principle merely serves to undermine its general acceptability.

Indeed, more than other states, all the five permanent members of the Security Council bear a huge responsibility in this regard for ensuring that their historical privilege is used more to protect the U.N. Charter than to breach it as is happening currently in Libya through the blatant illegal, brutal and callous NATO’s murderous bombings.

After over twenty thousand NATO bombing sorties that targeted Libyan towns, including Tripoli, there is now unbelievable and most disgraceful scramble by some NATO countries for Libyan oil, indicating thereby that the real motive for their aggression against Libya was to control and own its abundant fuel resources. What a shame!

When we in Zimbabwe sought to redress the ills of colonialism and racism, by fully acquiring our natural resources, mainly our land and minerals, we were and still are subjected to unparalleled vilification and pernicious economic sanctions, the false reasons alleged being violations of the rule of law, human rights, and democracy.

My people have condemned these illegal sanctions and recently over two million signatures of protesters have demonstrated their antipathy to them. We thank SADC and the African Union for supporting us and demanding the immediate removal of the illegal sanctions.

We in Africa are also duly concerned about the activities of the International Criminal Court (ICC) which seems to exist only for alleged offenders of the developing world, the majority of them Africans. The leaders of the powerful Western States guilty of international crime, like Bush and Blair, are routinely given the blind eye. Such selective justice has eroded the credibility of the ICC on the African continent.

The current global economic crisis and its attendant financial crisis compounds the plight of us, the most vulnerable, the developing countries. The present international economic and financial architecture has to be reformed and made to respond timeously to the real needs of all our peoples. The situation challenges the ability of our developing world to achieve the Millennium Development Goals.

As we celebrate the l0th anniversary of the Durban Declaration and Plan of Action (DDPA) against racism, xenophobia and other related social ills, let us all recommit ourselves to fight and defeat these evils.

My country fully supports the right of the gallant people of Palestine to statehood and membership of this U.N. Organisation. The U.N. must become credible by welcoming into its bosom all those whose right to attain sovereign independence and freedom from occupation and colonialism is legitimate. Similarly, the tormented people of the Saharawi Arab Democratic Republic must not be forgotten. We call for immediate progress in the engagements for a solution to their long-running saga.

The Conference of the Patties (CoPI) later this year is a pivotal occasion from which we should emerge with agreed measures to address matters of climate change and how to mitigate threats to the very existence of small-island states in particular, and to the coastal regions of many heavily-populated nations. Zimbabwe will be fully engaged in those negotiations.

Let me reiterate my country’s full belief in the aspirations enshrined in the Charter of the U.N. We must all resist any abuse to which it may be exposed through the unwelcome behaviour of a few. My country celebrates the UN-Women entity as it addresses the position of more than half of humankind in all our countries.

The African Union must not be undermined, rather, it should be allowed to complement the UN’s efforts for peace and security on the continent. Zimbabwe is a peaceful member of the AU, SADC, COMESA, NAM and many other international economic and trade organisations and thus desires to continue to play its part in creating a peaceful environment in the world. The United Nations can count on the unqualified support of Zimbabwe as required, even if only in our modest way.

May I wish the 66th United Nations General Assembly every success, Mr. President.

Russia warns US of ‘consequences’ of Ukraine military aid: reports