Jonathan Moyo’s desperate self-defence in light of politically damaging WikiLeaks cables make interesting reading. To spice up his damage-control but unpalatable menu which he often employs with a discerning gift of oratory, the politically prostituting professor forlornly used “interlocutor” when he referred to ZANU PF traitors who renounce the “devil” during the day but become bedfellows under the cover of darkness. 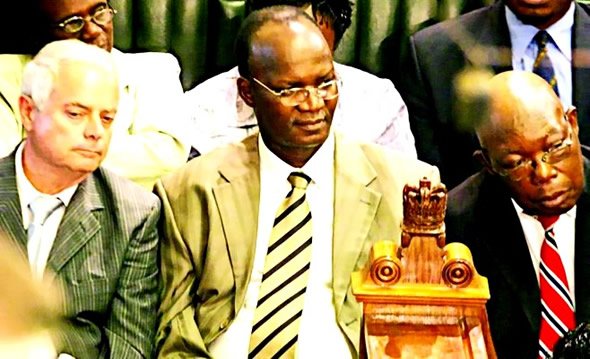 Describing MDC officials who allegedly exercised their freedom of speech while confiding in representatives of friendly and democratic nations as treacherous and treasonous was most bizarre while those from his own party were called “interlocutors”. I lost count of the number of times this term was used in his typically monotonous style.

To try and regain trust of his masters, Jonathan Moyo revisited the over-recycled “regime change” mantra as if he is not aware that MDC was formed not to perpetuate ZANU PF misrule but to terminate it. The sooner this asinine political phrase is wiped off our vocabulary, the better.

One would have thought that MDC officials were talking to the Chinese, Russians or Iranians and not their traditional allies. On the other hand, ZANU PF members acted as if they could not distinguish between Washington and Beijing. Surprisingly, some of those implicated are too young to be this geographically challenged!

While the Nutty Professor says those from ZANU PF who had confidential conversations with American diplomats did so harmlessly and innocently, he sees treachery and treason when opponents from the other spectrum of the political divide do the same. To further demonstrate his sanctimonious mentality, Jonathan Moyo tells us that “there is no thought crime in Zimbabwean laws”.

Clearly, he selectively, foolishly or genuinely forgets that not long ago when WikiLeaks was added to our vocabulary, he almost ordered the contentious Attorney-General, Johannes Tomana, to expeditiously prosecute Morgan Tsvangirai for exercising the same freedom of thought that we are now told it is never a crime under our laws.

What we are seeing now is what our wise elders call “kupemberera n’anga ichabata mai” – loosely translated means “celebrating a witch doctor who ends up implicating your own mother”. Even sworn followers of ZANU PF commenting from all corners of the globe including those enjoying the comfort and breeze of Bondi Beach have started castigating “revolutionary cadres” for selling out to the enemy.

A lengthy article in The Herald entitled “Worshipping at the shrine of Empire” shows the level of frustration in the former ruling party whose disintegration has now been exacerbated by the WikiLeaks circus.

If ZANU PF and MDC were to be rated on a scale of 1 to 10 in terms of who was affected most by these cables with 10 being the most negative score, Jonathan Moyo and his party would be very luck to walk away with less than 11 points even if the judge were flown from the East. As a matter of fact, Zimbabweans now know that all is not well in ZANU PF to the extent that very senior members of the party are now literally begging the Americans to help them manage their succession planning fiasco.

This is the core message that nocturnal messengers such as Kasukuwere, Mzembi, Jonathan Moyo and Sikhanyiso Ndlovu had for the diplomats. Gideon Gono weighed in as the biblical Ezekiel of the group when he curiously prophesied that Mugabe would not live beyond 2013.

As for Morgan Tsvangirai, WikiLeaks cables have confirmed that he is a consensual leader who does not make unilateral decisions without consulting far and wide, within and without his own party. His patience, ability and capacity to listen does not end with the first person he meets, but also begins with the last one he talks to be it an ordinary peasant farmer from Gokwe, a labourer from Mvurwi, a professor, doctor or lawyer from Harare.

It is this character in him that has given ZANU PF sleepless nights especially after losing the 2008 election. Those who have labelled Tsvangirai a dictator in the past have now been made to eat a humble as it is now in the public domain that the opposite is true unlike elsewhere where the presidium is the alpha and omega of decision-making while the spineless politburo perfects rubberstamping.

Is freedom only for those who support Zanu PF?